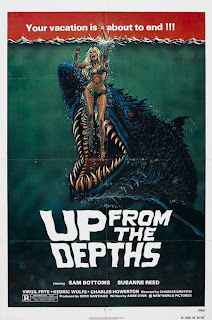 With his "Jaws" rip-off "Piranha" being a surprise hit at the box office and no doubt being drunk off that success, producer Roger Corman decided to bank (with no on screen credit) another "Jaws" inspired water logged thriller for his Filipino partner-in-crime Cirio H. Santiago with "Up From the Depths". Unlike "Piranha", "Depths" doesn't have the luxury of having a talented up-and-coming director in the form of Joe Dante behind the camera resulting in an extremely poor man-eating fish picture that, unlike its predecessor, will NOT be remade anytime soon (unless of course you count the similar themed "Demon of Paradise" in 1987).

A sunny vacation spot in Hawaii (see Philippines substituting for Hawaii) comes under attack by a deep water man eating fish when currents shift bringing up deep water fish to the surface. Now it's up to swindler Sam Bottoms (what the hell is he doing in swill like this?) and his girlfriend to stop the man-eater before it makes the tide crimson with the blood of tourists, shutting down the local resort.

Cirio opts to only serve as producer for this log of brown trout and leaves the directing talents up to frequent Corman collaborator Charles B. Griffith who seems deeply confused on what manner to treat the material. In trying to mimic Joe Dante he tries to add some sly sardonic humor to the film no doubt knowing the plot is B movie drivel but like many others that try to mimic the great Dante inferno he fails miserably. Rarely, I do many VERY rarely the humor works (I do admit having Sam Bottoms screen credit appear over some jiggling hula girls butts was great). The humor just comes out very awkward. Take the resort manager for example... what the fuck is up with this guy? One of his employees comes in depressed one day and he has to gall to ask if she's pregnant. Funny? Maybe unintentionally but it mostly comes out just plain awkward.

Like "Jaws" the resort decides to give a $1000 reward to anyone who slays the beast. This damn monster fish ends up killing dozens of people. Who the hell is willing to die over a measly $1000? Oh and the beast is seemingly indestructible and has more lives than a god damn terminator.

The monster fish itself is a sight to behold for unintentional laughter. It's just a big slow moving brown piece of fiberglass. Yes it literally looks like a turd. I understand the effects team didn't have much to work with but these effects are just horrendous.

"Up From the Depths" is a FAR cry from the B-movie goodness that was "Piranha" but it will be special interest for fans of trash cinema from the 70s. It's got a big, shitty looking killer fish eating up dumb vacationers hungry for a buck. It fails at mixing sardonic humor with B-movie thrills but still hold enough entertainment value for the curious movie connoisseurs of obscure monster films. Released on DVD in a double feature with "Demon of Paradise".