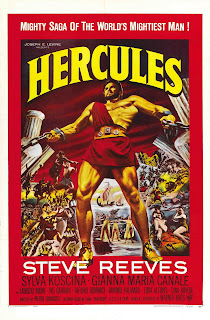 Long before the Italian cult genres of spaghetti westerns, poliziotteschi, giallo and macaroni combat was the peplum, also known by the more derogatory term "sword and sandal". The peplum genre was jumpstarted by the American historic epics like "Spartacus" and mythical adventure films like "Jason and the Argonauts". The first release of the peplum genre is was the popular "Hercules", a film that established the genre inspiring hundreds of films similar in mold..

Despite being popular in back in the day, peplum films don't seem to be as popular with the Italian cult film crowd today when compared to other subgenre's like spaghetti westerns and gialli. Why is that? Is it due to the lack of gritty violence and other over-the-top tendencies or even for the homosexual undertones of seeing well built, greased up body builders? Well for my money it's because there truly isn't a great film in the genre. "Hercules" is considered the crème-de-le crème that the genre had to offer. It was the "Good the Bad and the Ugly" and "Deep Red" of the peplum genre. And to be honest it isn't that good.

Sure "Hercules" is entertaining enough as a B-fantasy film but it's far from great. Steve Reeves looks part of Hercules with his "Mr. Universe" physique but his acting, along with the rest of the cast is below par. The acting of course isn't the only problem with this "epic."

The narrative of the film is sloppy and it's hard to follow the disjointed plot as Hercules falls for a young princess and basically hired by her father to find the golden fleece that Jason and his Argonauts stole and along the way fights numerous foes and finds out the killers of the kings brother.

The plot of this film depends on the audience knowing the story of Jason and the Argonauts. If I never saw the popular American film, which actually came out after this, I would not know what the fuck was going on here as Hercules bounces around from situation to situation looking for the damn thing. Even though this came out four years before "Jason and the Argonauts" I recommend viewing that film before delving into "Hercules."

The special effects are also extremely laughable as Hercules and his soldiers fight bulls, lions an even a fucking dinosaur. I can't judge a film too harshly for below par special effects but boy oh boy does this wish for the day of Ray Harryhausen.

I enjoyed "Hercules" enough for what it was but let's be honest, it's a brainless fantasy film with a muscle bound hero sleepwalking through a poor flowing script making it just an "epic" B movie. This is why I believe the genre has never truly been embraced as no director was able to craft a great film out of the genre, despite future talented directors like Sergio Leone getting their start there. At the time though "Hercules" was an enormous success and much like popular names in the spaghetti western genre like Django and Sartana, Hercules would be followed by what seems like an infinite number of unofficial sequels starring other muscle bound men cashing in on the Herc name. Out of all those cash-in's, only one official sequel would be made with Steve Reeves returning to the role in "Hercules Unchained." The Italians would later reinvent the story of Hercules in the laugh educing 1983 remake starring Lou Ferrigno.