Children of the Corn II: The Final Sacrifice - 1/5 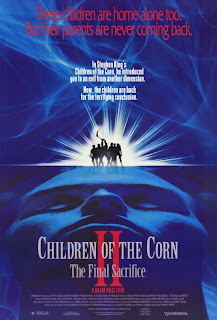 In the early nineties Dimension films acquired the rights to the "Hellraiser" and "Children of the Corn" franchises and boy they didn't sit on them like New Line Cinema did when they acquired the "Friday the 13th" franchise. Dimension sequelized the hell out of both series. "Children of the Corn II: The Final Sacrifice" would be the first of 6 sequels (with a seventh in the works) the company produced up until the time I write this review. After re-watching "Children of the Corn II" for the first time since I was a kid it's hard to believe 5 more sequels would follow as this sequel is worse than having a corncob stuck up the ass.... again.... and again.

Taking place mere hours after the events of the first film, we are now introduced to a snotty, foul mouthed teenage asshole and his down-on-his-luck dead beat dad moving to the mangled town not seeming too concerned that cops and paramedics are everywhere picking up bodies. Yes I understand the father NEEDS the job but holy hell.... turn the fuck around! No job is worth living in a town where all the children killed the fucking adults! Since the leader child Isaac "died" the first time around, we now are introduced to new leader "Micah" and predictably the children start killing the adults all over again.

"Children of the Corn" was hardly a great film (one might even call it a poor Stephen King adaption) but it had a charm about it and a solid cast of actors with even the children coming across threatening and scary at moments. Here it's a god damn joke. The acting is wretched, the script tepid and cliché, and the death scenes are insulting. Highlights include a women getting crushed by her house ala "Wizard of Oz" (the writers even have the gall to have her mutter "what a world" before she goes splat), a guy having a nose bleed from hell (via voodoo doll) and even a women in a scooter being rammed through a window. The worst part is the crackerjack story which adds the twist that mold growing on the stored corn harvest drove the children mad. What?! These writers seem to be throwing shit at the wall just to see what sticks.

Director David Price is almost non-existent giving the film a flat, direct-to-video look despite this corn cob of shit getting a theatrical release. He can't direct his actors and mixed with a shitty script he churns out a another completely pointless sequel to a film that really didn't deserve one, let alone a franchise.

Perhaps in a different mood I would have enjoyed "Children of the Corn II" more as an unintentional comedy but I will be honest and in saying I loathed it and it annoyed the living shit out of me. It's just another pointless crummy sequel that I seem hell bent on wasting my time on. Even being a complete turd this is one of the most highly prized DVDs horror fans can hunt down. Why is the DVD so rare? Well in the early days of Dimension Films they partnered with Paramount to distribute their movies (this along with "Hellraiser III"). Due to this contractual issue neither Paramount nor Dimension is able to release it on DVD (a similar problem occurred with "Hellraiser III" which was released on DVD for a short time and quickly went out of print). "Children of the Corn II" was released on DVD in Canada from a company called Top Ten Media but it also quickly went out of print and only occasionally appears on eBay. I was lucky enough to score this DVD, along with the other sequels, at a pawn shop for pennies so I plan to waste plenty of more time on this lame series.