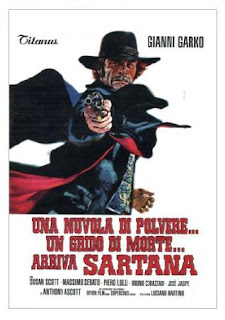 A spaghetti western franchise going onto its fourth entry and still going strong? Not only is it still going strong but this is arguably the best sequel and even contender for best film in the franchise. How many "Part 4"s have that kind of reputation? None that I can think of off the top of my head and that's why the Sartana saga is going down in my book as one of the strongest franchises of all time as each entry is close if not surpassing the quality of the entry before, but then again I still have one more entry to go before this series comes to a close.

Sartana gets word from a friend in prison that he was wrongly accused and set up by some people for stealing a million dollars in gold. Sartana helps him out in typical games James Bond fashion breaks him out and heads to town to solve the mystery but not before being set up himself and figuring out clues in plot twists galore.

The plot can be a little tricky with all its twists and turns but it's not as convoluted as some of the sequels before but audiences need to know beforehand this isn't some lame brain western with a simple plot about revenge.

Giuliano Carnimeo has directed three of these films now and his flavor is still strong as ever with plenty of tongue-in-cheek humor mixed with rousing action sequences. A crowd pleaser that's for sure! Instead of having Sartana use magic tricks or throwing cards this time he has Sartana use weird mechanical contraptions including a windup toy with a gun but the mother of gadgets comes towards the end. Sartana being calm and cool sets up an organ in the middle of the street while hordes of angry gunmen coming down upon him. You see this isn't any ordinary organ... it's an organ from hell as each pipe is a rifle and in its belly is a Gatling gun that mows down this army like a blow torch through butter. Django eat your heart out! Ridiculous, you bet but it's one of the most memorable sequences in a spaghetti western you will ever have the pleasure of witnessing.

Sadly this would be star Gianni Garko's final portrayal as Sartana. Why did he leave the franchise? None of my research has shed light on the subject but director Giuliano Carnimeo forged on to make one more entry with actor George Hilton taking over the role. Even though it would be Garko's final portrayal he still puts everything he has into the role making Sartana cool as ever. A sequence where he uses a burning counterfeit bill to light his cigar sums up the total badass nature of this character (Did John Woo by chance see this film and copy the counterfeit cigarette lighting sequence for his spectacular Hong Kong crime picture "A Better Tomorrow"?).

Chock another wonderful film up to Sartana as it seems the franchise can do no wrong! Perhaps I'm speaking too soon as I have one more entry to go in the franchise and Garko stepping out of the role could be a bad omen but I'll just have to wait and see. I just have to ask why, oh why this series hasn't had proper DVD releases here in the states? The VideoAsia collection "Sartana: The Complete Saga" leaves a LOT to be desired when it comes to transfers but I guess it will have to suffice until a more reputable company will release them. Are you listening Wild East?

Sartana will return in "Sartana's Here... Trade Your Pistol for a Coffin"