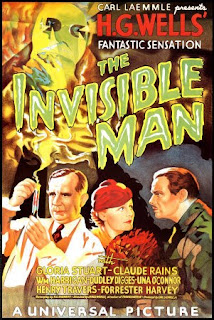 James Whale was the hot director in Hollywood after his enormous success with "Frankenstein" in 1932. Universal wanted him to direct a sequel right away but he really didn't have the ambition too and instead convinced the company to produce a film version of the H.G. Wells science fiction masterpiece "The Invisible Man" making history in both special effects and how to blend both effects and high drama together successfully.

Our film opens atmospherically with a gauze bandaged man with goggles making his way into a pub and motel during a blizzard. This queer individual is peculiar and demanding and his attitude gets him evicted upon which he unveils his true nature of being rendered invisible due to some experimentation he tested on himself. Now he has gone completely made, killing people at random and using an old colleague to aid him on his insane conquest to bring anarchy to the UK.

James Whale's marvelous early 30s style of filmmaking is peaking at this point with wonderfully set up and filmed sequences utilizing the best that black and white film stock has to offer. He also is able to masterfully blend in amazing optical special effects that hold up even to this day. Though the effects are truly amazing, they don't take away from the true human drama of the plot as our mad scientist grows increasingly senile into megalomania as time goes on with his invisibility.

Claude Rains became an instant star after "The Invisible Man" but surprisingly he isn't even revealed until the last few moments. Through most of the picture he has to act with his body language and voice as his face is covered up with bandages. Rains has a amazing voice and when he cackles with glee at the horrors he is causing one truly believes this man is truly insane.

Typical in Whale fashion he surrounds his main stars with colorful secondary characters who bring a lot of charm and even humor to the story (fans will recognize the shrieking women later in Whale's sequel "Bride of Frankenstein"). This humor slant is something Whale loved to play with and he injects it perfectly even in terrifying sequences, like our invisible man chasing a woman down the street only clad in a pair of slacks while singing a song. Horrific and yet comical at the same time.

Much like Universal's "The Mummy" closely resembled their adaption of "Dracula", "The Invisible Man" also closely resembles "Frankenstein" so much so that one might feel déjà vu. Both mad scientists prefers to work alone, away from family and colleagues. Both leave beautiful fiancées at home wondering where their loved one is. Hell both films even end with a mob trying to burn the monster out of a building. This commonality between the two films is the only aspect I can rag on but it hardly hinders it from being an all time classic.

"The Invisible Man" is a truly amazing cinemamatic experience that holds up surprisingly well even today with it's wonderful practical optical special effects (techniques that remained unchanged for decades until the invention of CGI) and its solid filmmaking. Universal sure knew how to make great movies back in the day and I can just imagine how "Invisible Man" awed audiences in the 30s. Of course it was a huge success and like most of Universals other successful "monsters" the "Invisible Man" became a franchise followed by four sequels ("The Invisible Man Returns", "The Invisible Woman", "Invisible Agent", "The Invisible Man's Revenge") and a spin-off comedy with Abbott and Costello. With all the sequels , spin-offs, remakes and copy-cats there still hasn't been a film about invisibility yet to match the power of Universal's original.