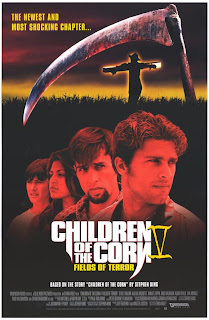 Well filmmakers decided to reverse and go back down the valley after making headway with "Children of the Corn IV" deciding to go for a more dumbass approach with this fifth entry. I'm sorry but when you hire the guy who wrote and directed the notoriously bad sequel "House II: The Second Story" it doesn't bode well that your sequel is going to be any good.

Writer/director Ethan Wiley loads this film up with insanely dumb shit with plot holes big enough to drive a combine through. First off it doesn't reference any of the events of the previous films so it's safe to assume this is another completely new story into the franchise. The plot hole that gets me the most is our main character arrives in this town and is shocked to find out that her brother might be there. What? Unless the church that follows "He Who Walks Behind the Rows" has multi establishments throughout the midwest then that means she lived near this town hence her brother left to join the cult, yet she's never heard of it? Bullshit!

Other dumb plot moments includes our group coming across their car being firebombed by the hellish kids in the corn so they walk to the nearest house for help. Hello! Chances are this is the place where the people that torched your car live! To top it off they fucking go Goldilocks on the place by drinking their beer, eating their food and even having sex in their beds. Fuck, they might as well wear shirts that say "Kill me, we are jackasses". The most unintentionally funny moment is after all this shit with the children goes down, our main character reveals to her friend that her boyfriend committed suicide but she hid the note in order to protect her. Talk about an inopportune moment to drop the bomb! Oh there is also some funny shit involving an internal flame that the children keep burning in a silo to make sacrifices to.

Ethan Wiley doesn't seem to know what direction he wants to take the film in. He has some really silly moments and even casts cult actors Fred Williamson and David Carradine no doubt wanting to add to the fun. However he just makes the film unpleasant and completely wastes the talents of the cult cast he cultivated. Thanks for nothing Ethan!

This may not be the worst entry in the series but it still sucks. It doesn't know if it wants to be silly or serious and just comes out being unintentionally funny and unpleasant at the same time.... in sense it's just basically worthless. It was still a hit on video so more sequels were to come. Oh I forgot to mention this film also stars Alexis Arquette, yes the one that had a sex change operation no doubt to help people forget that he/she/it appeared in such drivel.