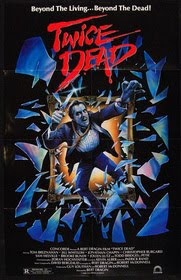 Oh boy is this a doozy of a haunted house thriller from the Roger Corman factory. Sure the poster art looks promising enough but Corman was always good at getting talented artists to make appealing poster artwork in order to suck unsuspecting audiences into the theater. In the 70s most of his productions were good cheese even if the eye catching poster artwork lied just a hair. By the late 80s most of his productions were pure junk only appealing to the trashy crowd but by god they still had good poster artwork. I will admit I enjoy some of his trashy late 80s offerings like “Bloodfist” and “Terror Within” but most tend to be along the lines of “Twice Dead”, which is a definite D.O.A.

This cheapo wanna be haunted house thriller has bad acting, a bad script, bad effects and to top it off it can’t keep it’s plot straight. The intentions of the spirit are never made clear. First it tries to kill off family members, then it protects them, then it wants to kill them again. This ghost is worse than a PMSing wife off her bipolar meds. What the fuck does it want!

What pisses me off even more is that I actually like a few of the cast members. It has the guy from the lovable B-movie “The Brain” and the cutsy girl from “Night of the Creeps” as brother and sister. Even they can’t bring this tired, cliche film up to speed.

"Twice Dead" has a cliche, confused plot with bad acting and poor gore effects. This twists are dumbfounding and worst of all its just completely forgettable. No Roger Coman B-movie charm for this dud. Thankfully it was included in a double feature DVD with an actual decent haunted house thriller in the form of “The Evil” so I can just pretend this was a bonus. Not worth hunting down and I say pass this one on by.

Written By Eric Reifschneider
Posted by Cronosmantas at 10:37 AM