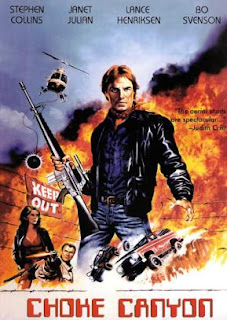 It's a good thing Cod Red DVD released this film with its more popular "Choke Canyon" title on the box artwork as opposed to the film's original title (the one also present on the title card) "On Dangerous Ground" as god forbid someone mistakes this average action film for the dreadful Steven Seagal film of similar namesake "On Deadly Ground. Unlike THAT film, this is not a horrible action picture which is surprising considering Italian mastro-of-shit Ovidio G. Assonitis, the man behind stinkers like "Beyond the Door" and "The Curse" produced and even wrote it.

Choke Canyon is a special area near the Grand Canyon for cowboy physicist David Lowell (Stephen Collins) as the sound waves are unique in the ravine for aiding in his quest to produce energy from sound. Some corporate bigwigs have other plans as they want the sight to illegally bury toxic waste and when Lowell refuses to sell, they wreck his lab and attempt to murder him. Lowell doesn't take kindly to their trespassing so he starts making their life a living hell by blowing up buildings and kidnapping the CEOs daughter. The corporation bounces back by hiring mercenary Bo Svenson but can Lowell take his lab and land back before Haley's Comet passes over delivering the sound waves he needs?

The plot is a bunch of mumbo jumbo that only Ovidio could cook up. It's just silly, far-fetched and hokey at times. What saves this film is the surprisingly good action sequences and the solid cast. Stephen Collins would not be the first actor I would pick for an action hero but he does shockingly well here. His character is smart, confident, kind-hearted yet forceful when he needs to be. Collins totally dismayed the hell out of me with how well he pulled the role off. Lance Henrickson and Bo Svenson are also heavy weight actors in lesser roles as a corporate goon and the mercenary and cult film enthusiasts will love the addition of them.

Though the actors and characters are solid they make far too many irrational decisions and actions for me to believe. Lowell, who is a scientist all for making peaceful energy, uses extreme acts of violence and even kidnapping to get his land back. Why use so much violence when your against it in the first place? The kidnapping portion also seems to go against character for him. Svenson's mercenary also starts off majorly badass but he really ends up being a total fuck-up and really isn't much of a challenge for Lowell. Lowell defeats him far too easily too many times to make their match-ups intriguing.

The action sequences are really hit and miss. The film has some really terrific stunt work, especially when it comes to planes and helicopters but a few of the stunts hit a little too close to "Cannonball Run" for my taste. Some of the stunts look too staged and really add nothing to the plot other than to say "look what we can do". A little less "Cannonball Run" approach to the stunts and they would have been remarkable.

Overall "Choke Canyon" is an interesting forgotten action films from the mid-80s. Not a great film by any means, hell not even particularly good one but the great cast and solid pace and stunts makes this worth a hunt for fans of the obscure.