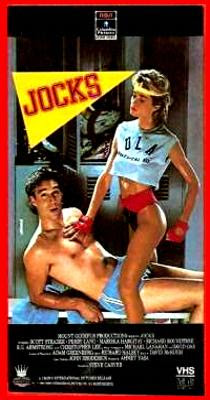 Out of the primordial slime that began with "Porky's" and "Revenge of the Nerds" emerged hundreds of knock-offs riding the coat-tails of those successes. Most of these teen sex comedies, except of the afore two mentioned, are completely worthless other than some on screen skin. One of these hundreds of worthless knockoffs is "Jocks" but it's even worse than most of its competitors as it doesn't even have the decency to offer it's intended teenage boy crowd the nudity they crave.

"Jocks" is about a college tennis team (yeah, because when I think of the term "Jocks" I think of fucking tennis!) that is on the verge having their program shut down. They travel to Las Vegas for the playoffs and while trying to make up for all the hijinks they cause, try to win the playoffs and save the tennis program.

"Jocks" is plain and simple NOT funny. Our main lead tries to be a loveable screw-up but he's completely uninteresting. The plot moves at a snail's pace resulting in boring the predominantly male audience into sleep without even giving them the nudity they expect. The filmmakers even try to mimic the success of "Revenge of the Nerds" by casting actor Donald Gibb (who played ogre in "Nerds") as a similar, yet painfully unfunny character named Ripper.

What's a damn shame is that this film is loaded with great actors, some to come and some towards the end of their career. We get R.G. Armstrong, Christopher Lee and Richard Roundtree in throw away roles but fans of "Law and Order: Special Victims Unit" might want to watch to see a very young Mariska Hargitay, who is just smokin' hot. Make this a double feature with "Ghoulies" to get your fill your young Mariska.

"Jocks" sucks and it just makes me cringe to see good actors such as Lee and Armstrong wading through this sludge to claim their paychecks. Even on the most basic levels of a 80s teen sex comedy "Jocks" fails to deliver and this lame film deserves to be lost in the sea of bargain multi-film DVD sets.