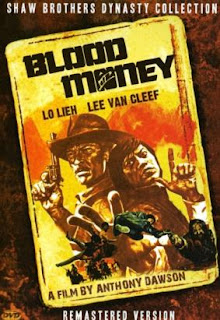 Newly arrived theif Dakota (Lee Van Cleef) gets falsely accused of murdering a wealthy Asian while visiting a small western town. Jump to Hong Kong and Ho Chiang (Lo Lie) is given a do-or-die mission to save his families honor to go to the west in order to discover the where-abouts of his uncle's fortune. He teams up with Dakota for help as they discover Chiang's uncle tattooed for separate ladies behinds (or as Cleef puts it... "asses"). Now they must convince four separate women to show them their luscious behinds before a psychotic religious nut beats them to the treasure.

The plot is hilarious and I found more genuine humor here than a lot of the forced humor in other spaghetti western films like the "Trinity" series. Cleef and Lie play off each other wonderfully. Neither may be at the top of their game (how could they with such stellar films as "The Good, the Bad and the Ugly" and "King Boxer" between the two of them?) but they both seem to be having fun with the subject matter.

Director Antonio Margheriti (aka Anthony M. Dawson) is no stranger to the spaghetti western genre but surprisingly he seems to hold his own when it comes to directing the kung fu sequences. He seems to have no problem mixing the two genres, though in his favor the film is more of a spaghetti western as opposed to a kung fu film. Even with the mish-mash of these two genres he still as able to wonderfully craft humorous sequences that really got me openly to laugh. Like I've mentioned in other reviews I'm not a huge fan of spaghetti western comedies but the comedy touches he provides here work well.

"Blood Money" (originally released in the U.S. as "The Stranger and the Gunfighter") was a romp of a good time wonderfully mixing both the spaghetti western and kung fu film style elements. It's not a fantastic film by any means and doesn't wholly succeed as either a western or martial arts picture but as a mixture of both it's an entertaining piece of work and in my humble opinion one of the highlights of director Antonio Margheriti's career.

Loathed company VideoAsia released this lost gem on DVD. Cult film fanatics know this company as a shoddy bargain company that haphazardly throws together cult films via VHS transfers (sometimes unwatchable, beat up VHS transfers) into overpriced multifilm packs. "Blood Money" is, to my knowledge, the only film the company has released by itself and to be honest it's a surprisingly good transfer, anamorphic widescreen and all! Still it isn't perfect, as expected with VideoAsia as there are a few encoding glitches halfway through the film where the picture turns to blocks. Other than that this is BY FAR the best release Video Asia has ever unleashed and well worth a purchase for fans of this film.

Written By Eric Reifschneider
Posted by Cronosmantas at 11:50 AM