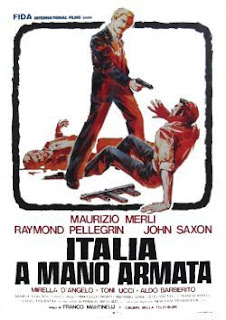 After gaining popularity in Italy with his portrayal of Inspector Betti in the poliziotteschi thriller "Violent Rome", star Maurizio Merli reteams with director Marino Girolami for this sequel, the second in the Inspector Betti Trilogy.

Eagle eyed viewers will notice a problem right away before even seeing the film considering the ending to "Violent Rome." If you haven't seen the previous film then please skip the rest of this paragraph. "Rome" ends with Merli getting shot in the back with a machine gun yet miraculously he survives unscathed for this sequel with no explanation. He also resigned from the police force to join a vigilante group yet here he is back on the force, no questions asked. Yes this sequel suffers from MANY continuity issues. There is NO references to the previous events of the last film so if you take that plus the blatant disregards for continuity then one pretty much has a completely different film that's only connection is that they both have a cop named Betti played by the same actor. Grr... continuity issues chap my ass.

Well this time Inspector Betti has to locate some thugs that have kidnapped a busload of children to use as ransom. After investigating and bitch slapping his way to answers, Merli is able to connect the thugs to a crime boss played by John Saxon. Saxon sets Betti up and which sends him to prison but Betti gets out on a technicality and sets out for vigilante revenge.

The plot is definitely less focused and standard poliziotteschi affair when compared to the first film. It just lacks that harder edge that Girolami was able to craft in Violent Rome resulting in this sequel being not as good and definitely the weakest of the trilogy.

To make up for the more standard plot the writers and director load up the film with plenty of action including car and roof top chases. They even give some new scenery by having some of the plot take place in rural farm areas as opposed the urban city. Most importantly we fans are given the introduction to the Merli bitch-slap as he slaps a thug to kingdom come for answers.

Poliziottechi fans will find plenty to like but this sequel isn't quite as good as it's predecessor. It's got enough action and bitch-slappin' to keep genre fans grinnin' but sadly I did expect just a hair more from it. Thankfully the next entry "Violent Naples" fills in the voids left open by this one.

Like the first film "A Special Cop in Action" is harder than hell to find in any format, VHS or DVD. Again I have to give a big thanks out to my friend Bill who can locate any rare obscure film. THANKS BILL!