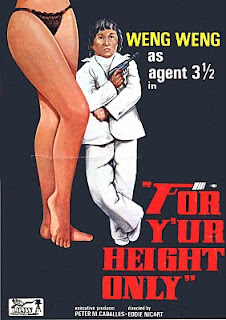 What we got here is a truly bizarre Bond spoof from our trashy filmmakers in the Philippines. It's so damn bizarre that only the likes of Mondo Macabro would unleash this film on DVD and I thank them as, like expected, this pint size film delivers 20 feet of entertainment value.

Agent 00, Philippines top secret agent who measures only 3.5 feet tall, is out to stop a drug ring. Along the way he kills a lot of goons, dances with women and uses weird gadgets to aid in his mission. Not much more to the plot than that.

I will be honest, Four Y'ur height only is quite badly made. The film has horrible jarring editing, bad acting, laughable dubbing and really no plot to speak of. The only thing interesting this film has going for it is it's pint size hero and they exploit his height to the max here by having our ass high spy being thrown into to all sorts of awkward and laugh educing situations where he kisses ladies, karate chops badies and constantly slides across the floor "hurting his little head" to blow scum away. I kid you not this little guy slides across the floor to shoot guys at least a half a dozen times!

Weng Weng plays our 3.5 foot agent and it's obvious the film was written around his vertically challenged deficiency as this guy sadly can't act worth a shit. Hell he barely has any lines throughout the entire film and when he does the horrible high pitched dubbing makes one's face crack open with laughter. Weng Weng also, not to be overly mean, looks pretty damn creepy especially with his forward comb over making every situation he gets in just that much more awkward. Mix that with some lifted James Bond music and your guaranteed to have some great laughs.

For Y'ur Height Only is a very badly made film that's only purpose is to exploit the size of its main star and exploit it does well as it has endless entertainment value for the trashy film crowd. Should I be ashamed by saying I enjoy a little man in a 70s polyester suit with a forward comb over running around with gadgets and gizmos and sliding across floors killing guys? I don't know but damn it is entertaining. This is a must for fans of the extremely bizarre and obscure. Alcohol is recommended to "heighten" the entertainment value. Get it? Heighten? Fuck I kill myself sometimes :-)