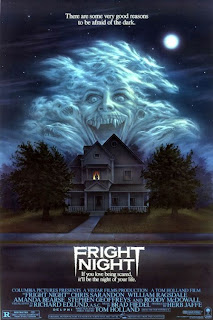 By the time the 80s rolled around the "vampire film" was an old fashioned, dried up dessicated husk. It had been done too DEATH. Though I love Hammer films, their overlong Dracula series became a joke near the end and thanks to multiple other Dracula films throughout the decades the period piece approach to the subject matter had just grown stale. In order to bring the subgenre back to life in the 80s it needed to be re-invented and Tom Holland new exactly how to do it with his wonderfully entertaining 1985 vampire opus "Fright Night".

The plot has an Alfred Hitchcock "Rear Window" approach as horror movie buff Charley Brewster, during one of his many voyeur spying incidents, witnesses his neighbor bite the neck of a prostitute. Convinced his neighbor is a vampire, his best friend and girlfriend grow worried of his growing obsession and seek help from Brewster's hero and role model horror film actor Peter Vincent (Roddy McDowell) turned late night horror film host. Is Brewster cookoo for vampires or is this a truely deadly problem?

What's so wonderful to Tom Holland's approach to the film is that it adds a fun 80's pop culture vibe to the vampire subgenre while at the same time tipping it's hat and honoring all the vampire films to come before. The character Peter Vincent is a wonderful reference to the horror actors of old (the name is the combination of both Peter Cushing and Vincent Price) and is perfectly played by ever likable Roddy McDowell. Another actor that steals the show is Chris Sarandon as the possible vampire neighbor, who is deliciously evil and charming at the same time.

Along with some truly scary sequences the film also contains plenty of humor, well balanced thanks to director Tom Holland who handles the material perfectly so it doesn't fall into camp territory. The amazing special effects are just the icing on the cake to make this a truly entertaining horror picture.

"Fright Night" succeeds at re-inventing the vampire film for the young 80s audience while at the same time staying true and honoring all the classics of the genre that came before. I find it to please audiences from all the generations with wonderful actors, visual flair, well balanced scares with humor and jaw dropping pre-CGI special effects. "Fright Night" will make sure your night is an entertaining one. A sequel would follow three years later.