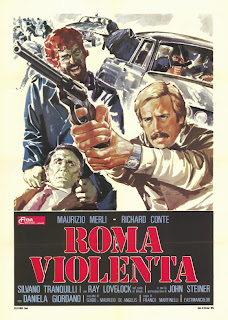 Maurizio Merli exploded onto the Italian cinema scene with this Poliziotteschi thriller, the first of a trilogy of films where he portrayed the character Inspector Betti. "Violent Rome" is the direct result of the huge success of the Franco Nero action thriller "High Crime" which was basically Italy mimicking the vigilante cop American films "The French Connection" and "Dirty Harry". The result is one of this cult Italian genre's most defining films which is EXTREMELY hard to find in an English friendly version.

After witnessing the results of a violent bus robbery where a young man was pointlessly murdered, Inspector Betti decides to get harsher on the criminals bringing Rome to its knees. After a hair raising car chase in which Betti killed a thug in cold blood (due to the thug gunning down his partner and a trio of helpless children), he resigns from the police force and joins a group of high class vigilantes made of up citizens who have had their lives ruined by criminals.

Many can criticize this film for being pro-vigilante as all the criminals in this film are portrayed as evil as possible. I mean these goons gun down helpless children, throw mothers from moving cars and rape daughters in front of fathers being forced to watch. Yes all these harsh crimes strongly put the audience on the side of the vigilantes but then again you can blame even more popular American films for using the same technique. I just simply have to say if your offended by films showing vigilantes taking out the trash then don't watch films with these plot elements.

I can't praise Maurizio Merli enough for his portrayal of Inspector Betti. Sure his career began solely for the fact he looks a hell-of-a lot like Franco Nero but he's much more than a Nero clone. He is mesmerizing as the confident, action orientated police officer and he oozes machoism off the screen. He is truly great with the anti-hero elements I love and he made a career of playing similar cop characters in numerous poliziotteschi films to come including Violent Rome's two sequels "A Special Cop in Action" and "Violent Naples".

Violent Rome lives up to its name as it is VERY violent and the action is just furious. The car chase is hands down one of the best I have ever witnessed and it's a damn shame that these rarer Italian films never get credit whereas their American counterparts like "The French Connection" take all the credit. Marino Girolami heightens the action scenes with his visceral realistic style by throwing the camera in the middle of the action. Mix this with an amazing acid rock/jazz influenced score and you have an action thrill ride from beginning to end.

Sure "Violent Rome" is one sided in its viewpoint on crime (and it has a head scratching ending) but that's what makes these 70's crime thrillers so fun. This is a "Dirty Harry" clone at its best and one of the main highlights of the poliziotteschi genre. For the life of me I can't figure out why this is so hard to find in an English friendly version. Sure it's released on DVD in Europe but only in Italian with NO English subtitles. I have to give a big thanks out to my friend Bill for locating me a copy with nice English subtitles. THANKS BILL!