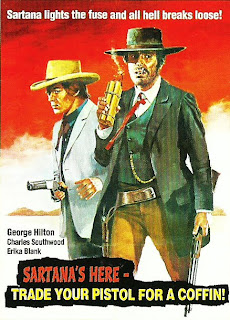 "It's a sandwich gun" - Sartana

Wha..wha..what?! A Sartana film without Gianni Garko? This can't be good. Well have no fear friends as yes Garko opted out of this fifth and final Sartana film (aka Fistful of Lead) into the official Pentalogy but filmmakers replaced him with a competent replacement in the form of actor George Hilton. Hell to be honest George Hilton is a much more popular actor in Italy than his predecessor but will he be able to pull off the role that inspired more official sequels than any other spaghetti western character? Well let's put on our shit kickers and see.

Sartana gets wind of a corrupt town official who is robbing stagecoaches transporting gold. He, with the help of his cunning wits and fast drawing hands solves the mystery while along the way trying to figure out how to beat his all time rival Sabbath.

Of course the first thing people are going to want to know is how Hilton does in the role. It is baffling why Garko passed on this film and with Hilton in the role it confuses a lot of people into thinking this is one of those many unofficial "sequels" that cashed-in on the name Sartana. Never-the-less Hilton does fine in the role staying true to the character while bringing his own little twists to the role, mostly more tongue-in-cheek humorous touches.

Giuliano Carnimeo, director of the previous three Sartana films, returns to direct this fifth entry and even with his experience of the franchise at the helm, this sequel lacks a lot of the flair seen in the previous entries. I doubt it was a stylistic choice and seems to be more of a budgetary one as this film just looks smaller scale and cheaper.

The writers also decide to make take a slightly more humorous approach with the subject matter (proved by my opening quote from the film) perhaps to tailor more to the new actor in the lead role. To me the more silly approach hindered the film as I just found it more puerile. The added humor isn't horrible, but it did make me hit my head a few times (again... read the opening quote).

Considering the change in the lead role this sequel doesn't come out bad at all but I can honestly say it is easily the weakest of the franchise. The lowered budget hinders the polished nature of the film and the added humor hindered some of my respect for the character. Considering all this it is still entertaining and Hilton proved he could easily handle taking over a popular role but sadly he wouldn't have an opportunity to tailor it more to his own as there would be no further official adventures of Sartana. Was it due to Spaghetti Western popularity starting to decline or did audience not react well to seeing a new actor in the role? It could be a number of combination of these things including that every other Italian western made at the time cashed in on the Sartana name (copyright laws are more lacked in Italy) confusing audiences on which films were truly part of the official series. Whatever reason Sartana didn't return, officially that is, making this the final chapter and in solid franchise. It sure was fun while it lasted.

Sartana will return.... in a shit load of cash-in unofficial "sequels". Reviews on those to come...
Posted by Cronosmantas
Email ThisBlogThis!Share to TwitterShare to FacebookShare to Pinterest
Labels: Spaghetti Western, Western / War