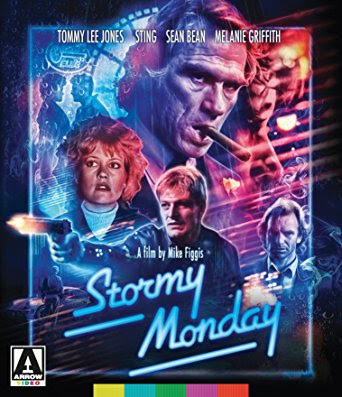 In the idea of being perfectly frank, Stormy Monday was a film that never crossed my consciousness until Arrow Video announced that they were bringing it to Blu Ray a few months ago. Considering the stacked cast, it did come as a surprise that the film seemed to be truly a cult item. However, it was concerning. A film with this kind of cast from a well-received director (and featuring cinematography of Roger Deakins) should have some notoriety going for it in cinephile circles, but perhaps it was just one that fleeted away from me somehow. After watching Stormy Monday though, it’s kind of understandable why this seems to be a forgotten piece of film. For what its worth, it’s a decently confident debut for director Mike Figgis, but it’s also a film so rooted in being a neo noir and subtle in its building of characters and plot that it comes off as too slow for its own good. On the back of the box it’s referred to as a ‘romantic crime thriller’ but the romance, thrills, and crimes all seem pretty safe in comparison to many of the other modern noir thrillers that have come and gone. It’s a good film, but hardly one to capture the heart.

Brendan (Bean) only just recently found a job working as a cleaner for a local jazz club under the shady workings of its owner, Finney (Sting). It just so happens that in that same day he runs into the same woman Kate (Griffith) three times and eventually takes her on a date. Things are looking up for ol’ Brendan. That is until he’s somewhat unwittingly dragged into a questionable land deal by the strong armed American Cosmo (Jones).

For a British thriller, it is a bit shocking at how much that Stormy Monday attempts to feel like an American noir film from decades ago. Director/writer Mike Figgis does his best to replicate the tone, narrative structure, and subtle character/plot builds of the genre for this one and his intense focus in this manner is respectable. Much of Stormy Monday is carried by the smaller details of the film, including some phenomenal visuals provided by Deakins and the scene stealing moments of the secondary cast of Tommy Lee Jones and Sting. The film is one that, for the most part, is very easy to consume in the whole, but also detailed enough in its representation of the city and its blend of different social class to make it one to appreciate. It even has a strangely effective and low key satire of the manner that America is viewed from a different scope (for 1988, at least) and it showcases some of the things that are just under the surface of the film. In many ways, it’s easy to see why Stormy Monday has developed its own cult following throughout the years and why many critics (including ones included in the booklet with this Blu Ray or on the special features) praise it so highly.

That is, unfortunately, not a similar opinion that I share about the film. Yes, Stormy Monday has a lot of enjoy about it in the details, but the film, as a whole, seems to have to fight back its consumable nature and subtle character growth moments to be memorable at all. It’s as if Stormy Monday gets a bit over half way to impressing on all of its stronger elements, but can’t quite push it into the next level of artistic merit. Sean Bean is solid in the lead role, but a bit bland. The neon visuals and bluesy hue of the film indicate depth, but don’t strike out to make a bold statement. The antagonists of the film are realistic and formidable against our two lovers, but never threatening enough for the audience to feel their presence at any given time. Even the love story, which is central to getting the plot and narrative moving, feels weirdly vague and hollow as if the Romeo and Juliet inspired “star crossed lovers” angle just feels like happenstance instead of fate. This if a film caught somewhere between the mainstream nature of its simplicity and realism, but wanting to generate a more artistic streak to be a universally loved film. Stormy Monday is a film I want to love and enjoy, but it ultimately comes off as one that meandered by and never hit its full stride.

Fortunately, for those fans and critics that appreciate this film for what it is, this latest Arrow Video Blu Ray release feeds into the artistic interpretation and details of the film that earn it the praise it has received. It features an audio commentary with the director, a new video appreciation along with a tour of the real life locations of the film, and it has a wonderful essay in the booklet that digs into some of its history and context. If anything, I found the additional features to be more interesting than the film itself and that’s a huge nod in Arrow Video’s direction to build a release like this around a film that doesn’t strike out as one deserving of the attention.

Stormy Monday will remain a cult classic for a reason. It’s packed with some fascinating performances, a confident debut for its now widely praised director, and it features some fantastic work from cinematographer Deakins. Within the context of cinema history for those involved, it remains an intriguing piece of cinema that will definitely interest those curious about it. For those who run in circles outside of where this film would have already been mentioned, it’s hard for me to give it the recommendation. It’s a good film, but one that, in the end, falls flat when it comes to being a romantic thriller of noir inspiration. 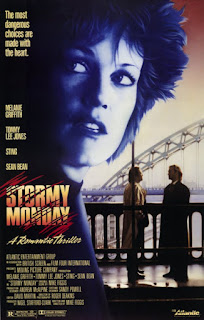