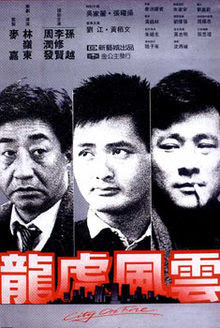 For a majority of the world, the existence of City on Fire remains a footnote as a film that inspired Quentin Tarantino to make Reservoir Dogs. For those who have sought it out, they may be horrified to find that it did receive a US release in an edited and terribly dubbed version which in no way or form ably showcases just how effectively brilliant this film is as an action thriller. Even for fans of Hong Kong actioners, City on Fire tends to be overlooked for the more widely available and high-octane films of John Woo. While this is not a knock on films like A Better Tomorrow or The Killer (each of which is a sure fire classic in its own right), City on Fire at least deserves to be mentioned in the same breath as those for being a peak of the artistic merit of Hong Kong action flicks. This long-winded intro serves to simply state what more people need to realize: City on Fire is brilliant and should be handedly ranked up there with the finest crime flicks ever made.

Ko Chow (Chow Yun Fat) has been undercover for far too long and its completely left his disillusioned and detached from his ‘real’ life. His girlfriend has given up on him as she is being wooed by a rich businessman and even his own department seems to have forgotten he exists as power is shifted away from his handler (Sun Yueh) for younger and colder officers. When he finds a family in a group of jewel thieves he is meant to infiltrate and set up, his decisions can be life or death. Betray a family that has accepted him and return to a life that is passing him by or leave it all behind and accept a new chapter that fits him now?

Ringo Lam proved himself to be a decently diverse director in his early career, but it wasn’t until 1987 with City on Fire (and also Prison on Fire later in the year) that he cemented himself as one of the auteur artistic forces in Hong Kong. For a film to make that statement, I’m not sure one can get much more impressive than City on Fire. Starring Hong Kong icons Chow Yun Fat and Danny Lee, the film has an impressive amount of talent to carry it even when the plotting and narrative start to hit some of the more predictable turns of its script. By now, the story of an undercover cop choosing worlds is easily one of the more mundane tropes of the action and thriller genre, but in this film its presented in such a layered and robust manner that one cannot help but care and relish in the gray areas it navigates.

Even the first two acts, which really delve in the circumstances and world shifting that lead to its explosive finale, can be occasionally seen as flawed as it adds in strange twists of humor and subtle character interactions within larger more melodramatic sequences. It establishes an uneven tone that adds to the depth of the film. The world that Ko Chow, as mentioned before is played with finesse and expertise by Chow Yun Fat, is one that is never sure footed and his own unstable sense of self bleeds into the world around him. He’s dancing in the street one second and running for his life the next trying to dodge police officers that have no idea he’s one of them. His relationship with his girlfriend is equally uneven and at times seems borderline abusive but then inherently romantic in the next moment.  This all feeds into the tone and character study that underlies the entire film. Ko Chow lives in the moment and every time he attempts to think about his future, it throws him and his loved ones into the path of danger. The use of repeated settings of death and pain in the film for Ko Chow (meetings with his handler in a morgue, meetings with his criminal partners in a graveyard, a finale set in an abandoned building where nothing lives) only add to it all. The strange tonal shifts and reoccurring themes of death and fear add to the layering. Ringo Lam navigates it perfectly and establishes the films perceived flaws as flaws with the circumstances and characters in its story making everything more visceral and real. It’s practically beautiful in how its accomplished.

Yet, despite all of its excellently handed build and character development, it’s the final act of City on Fire that truly soars. Occasionally the emotional heavy handedness of the Hong Kong style can be a detraction for those unfamiliar with the era and foreign approach, but for what it’s worth the final act hits every moment with a powerful and heartfelt force that rocks its audience. Whether it’s the jewelry store robbery that goes south and the horrifyingly violent gun battle that ensues with police or the tense standoff between Ko Chow’s criminal team and the police outside (made only more intense by the tension between their own members), the finale is perfection in a balance between the heroic bloodshed entertainment of its action and the emotional peak of the longer build in characters and circumstance that leads the film here. It would be criminal for me to give it away, but the film pays off with the investment its audience makes with all of its characters. It’s glorious to see.

In the end, it’s a disservice to simply dismiss City on Fire as a footnote to an inferior (but ultimately more popular film) like Reservoir Dogs or to think that it’s simply another heroic bloodshed film that pales to the more well-known films of John Woo of the era. This is a film that excels on every level. It’s powered by a screen devouring cast, handled with finesse and dramatic heft by Ringo Lam, and features one of my favorite third acts of any movie I have ever seen. It’s not necessarily the easiest film to consume in one sitting and a lot of its innovative detailing is only revealed on multiple viewings, but it deserves to be seen and appreciated more than it is. While the American cut and dub of the film is massively inferior (it mishandles a lot of the translation for the gray areas of the character dialogue) if that’s the way to see then I suggest. If not, try to find the original language and edit of the film. It’s worth the price.