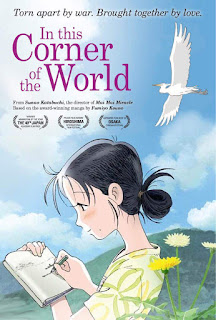 Residing in the seaside town of Eba, a young girl named Suzu, who loves to draw and paint, works with her mother making nori (seaweed in an edible form). Some years pass, and she finds herself in in Kube, a quite large city that sports a Naval port base. There she meets a young man named Shusaku, whom she agrees to marry in an arrangement prepared by his family. Once the two are wed, she moves to Kube and starts to live her life and finds happiness in her new location, but the threat of the Pacific war looms over the city as her and the surrounding citizens find themselves dreading the days the inevitable attacks will come. An absolutely beautiful and poignant tale, In this Corner of the World is easily the finest animated film of the year, and deserves to be seen by as many people as humanly possible.

One thing that I love right from the get go about this movie is that it really draws you into the world and lives of these people that inhabit the few towns and cities set throughout. Even the smallest of characters are very well fleshed out and you get to know them all in and out. It truly feels as if you are a local citizen living in this world with them. It has a true sense of family and humanism that is represented with romance, drama, and just day to day life that goes by, through the ups and downs, naturally and with great ease. It feels as if an entire anime series is condensed down in to a two hour film, and while it may feel a bit long at times, the weight of what is to come is made all the more heavier by the beautifully written characters that you've come to love. More so, knowing the history and the tragedy that unfolded only adds to the drama and heartbreak. Without spoiling, there is a scene that is very bold and would've been cut from a film of this nature typically, at least going for a lighter rating for release, if the film were made elsewhere or perhaps by a different studio. It's haunting and will be ingrained in my mind for years to come. 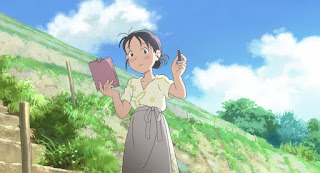 Visually speaking, the film is absolutely breathtaking. There is a water-painted aesthetic to the film as a whole, but as we see through the eyes of Suzu and her artistic mind, the world unfolds around her like a painting. There are small scenes of her creating these paintings and drawings, and seeing her character paint these out feels surreal but realistic simultaneously. It is awesome to see stroke by stroke these paintings being created in real time as the scenes carry out. Animation within animation, truly a thing of beauty and something to behold. Certain key moments of the war itself coupled with her vivid imagination make for a unique cinematic experience filled with memorable sequences.

My one complaint, is that the film seemed to drag on a bit at times. I get that it was trying to make the world feel lived in and showcase the lives of Suzu and the people and family that surrounded her, and it mostly succeeds. Certain scenes felt bloated and dragged out to the point of exhaustion to the pacing and rhythm, like a missed note in a song, but it never entirely disengages the viewer. It is all worth it in the end though as it truly adds emotional depth to everything that plays out. That isn't to write off the scenes prior to the war unfolding, as there are a lot of truly wonderful moments, but certain scenes felt unnecessary to the plot or character developments.

In this Corner of the World is a film that will resonate and leave a deep impression in its viewers' hearts and minds. It's subtle and humanistic whilst also being rich and vibrant in its vivid imagery. It's a lighthearted film that dares to go into the darkest moments of tragedy and does so boldly with great success. This is one that should do quite well internationally and will surely get further award nods outside of Japan. It may be flawed at times, but is most certainly one of the standout cinematic pieces of 2017. Here's to hoping this makes to as many screens as it can. It needs to be scene and experienced by everyone. A lovely animated feature.
Posted by Josh Parmer at 4:39 PM