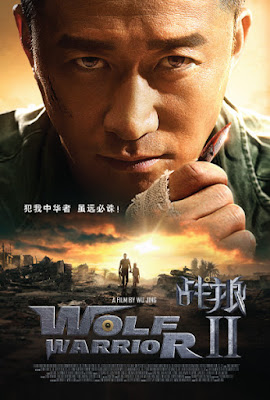 Wu Jing’s vanity project, funded by what seems to be the military recruitment fund of China, was 2015’s military action flick Wolf Warrior. That film, ultimately, was a mixed effort. Thin in its writing and big in its ambitions for action, it seemed to be a throwback to 80s style action with a modern military action slant that was much more enjoyable than it was ‘good.’ Even with that in mind, Wolf Warrior II was something of a surprise. As is the intent with most action vehicles, this film intends to be bigger, badder, bolder, and beefier than its predecessor and I’ll be damned if it doesn’t succeed in almost every regard. It’s still not a film that I would call great by any classical film critique standard, but Wolf Warrior II is so much energetic fun that it’s hard not to be swept up in its unstoppable current as an addictive action tour de force.

Leng Feng (Wu Jing) has been living and scouring the African continent for some time now. His personal mission is to find the owner of a very distinctive bullet that took the life of his love (Yu Nan). This leads him into some very hostile territory as a resistance force aims to overthrow one of the local governments using the power of hired mercenaries lead by the vicious Big Daddy (Frank Grillo). When a Chinese scientist and a group of other Chinese citizens are caught in the cross fire and unable to get to the Chinese embassy, it’s up to Leng Feng to fight his way to their rescue.

Truly, Wolf Warrior II is the Chinese equivalent of the 1980s Cannon Films action experience. For those of you that may not be familiar with ‘the Cannon formula,’ rest assured it’s all about big heroes, big guns, and big action with little in the way to stop them from destroying as much as possible onscreen in heroic manners to defeat vile 2D villains. Wolf Warrior II takes this approach to delivering its thrills and spills onscreen and it might be some of the most fun I’ve had with a film all year. This approach to bigger than life spectacle is relentless too, ripping from an opening scene where our hero Leng Feng fights off pirates underwater with his bare hands to a chess game of tanks in the finale. Explosions, gun fire, knife fights, and perhaps one of the most surprisingly fun and intense one-on-one martial arts battles (with Frank Grillo nonetheless) all make this film nothing but high-octane entertainment guaranteed to smear a smile on the viewer’s face. It’s as if Wu Jing is channeling his inner Rambo III in a film that’s more akin to a Missing in Action or Delta Force entry. The film is riddled with gimmicks to keep up the momentum, but watching someone power slide a tank or knock a gun toting drone out of the air like it’s normal practice hits a part of my cinematic self that digs deep into my childhood love of 80s action cinema.

The rest of the film doesn’t quite fare as well as one would hope, although it certainly remains a step up above the original Wolf Warrior. It’s almost absurdly cheesy as the film throws in a lot of obstacles for our almost superhuman hero to conquer including an African country in civil war and a kind of fast acting fatal plague for him to beat. It tends to wash over a few important things in the interim, including using Yu Nan’s character from the original one as a kind of cliché motivation for our hero while giving her some rather bland flash backs to exist in, and adds in a lot of characters haphazardly as it goes to give the film some forced heft when it comes to emotional relevance and resonance. More or less, much of it rarely makes a lot of sense and seems forced, but when it’s essence is essentially to get our hero from charismatic action sequence A to bombastic action sequence B with as little resistance as possible, it strangely works. When it’s at its cheesiest, including Wu Jing’s Feng using himself as a flag pole for the Chinese flag to cause an immediate ceasefire between warring groups so his convoy can get through, the film only adds to its entertainment and it has to be given some serious credit for that.

What it ultimately boils down to is this: if you are even remotely interested in a cheesy action film called Wolf Warrior II than this will most certainly hit a lot of the right buttons for you. It’s almost shocking at how much action is pumped into the film, Wu Jing showcases the right amount of charisma and screen presence to hold it together as the action star, and it slathers on enough silly plot and side characters to add on an entire layer to its robust entertainment value. It’s also a film that suffers from this intense focus by pulling away from strong characters and interesting plot devices for those more entertaining pieces of spectacle. Truth be told, personally, I had more than a blast with Wolf Warrior II. It is the next step up and forward for the franchise and one that only makes it more interesting. It’s not for everyone, but for those interested, strap on your bullet belt and your knife because it’s a trip back in time and forward for our favorite Wolf Warrior.

For the record, there is also a tease for Wolf Warrior III at the end of the film. I’ve already bought my ticket. For the rest, Wolf Warrior II is currently playing in select theaters and will hit home video soon enough from our friends at Well Go USA.