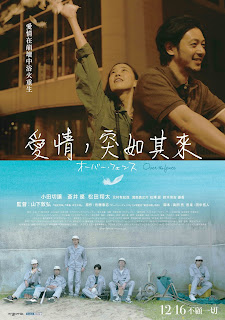 Officially dumped by his wife, Yoshio Shiraiwa (Joe Odagiri) returns to the town he originally hails from, Hakodate. Out of work, he finds himself at a vocational school learning carpentry so that he may start receiving unemployment checks to start earning a living again. At his school, he meets and interesting array of characters and one man in particular, Daishima, takes a liking Shiraiwa, and takes him to a cabaret, where he meets one of the hostesses, Tamura (Yu Aoi). She is a very vibrant human being and in an instant, Shiraiwa finds himself allured to her and the two begin to connect with one another in more ways than they initially realize.

Over the Fence is a very interesting film. On one hand, it seems like a lighter drama about friendship and a man rediscovering himself in a time when he has no lower a point to go, and on the other, its a dark and interesting examination of broken people suffering from various struggles such as mental illness, divorce, addiction, being a social outcast, and so on. There is always something going on under the surface of a majority of these characters, and it brings a level of depth to the characters that could've otherwise been flat in the hands of a less experienced writer. The screenplay, written by Ryo Takada, who also penned the equally rich and effective look on broken individuals, The Light Shines Only There, truly understands how to flesh out and balance a large myriad of characters and give them all enough time and attention to make even the smaller players extrude a great deal of importance and gives the feelings and emotions behind all the drama, no matter how large or small, a keen sense of realism. 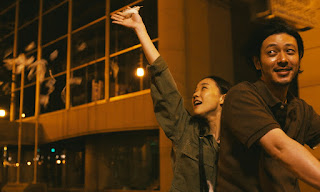 The performances by both Joe Odagiri and Yu Aoi are are equally fantastic and fascinating. Joe gives his best turnout in a lead role in years as Shiraiwa. His suffering is deeply hidden under the surface and he tries so desperately to not let his emotional distraught bubble up to the surface. He surrounds himself in people, trying to move forward and form friendships with those who are a part of the next chapter in his life, but there always seems to be a disconnect, that is until Tamura walks into his life. This exuberant and vivid individual, played in a heartbreaking and bold manner by Yu Aoi, becomes the beating heart that Shiraiwa thought he had lost entirely in his life. At first, admittedly, her character comes off as obnoxious and an overburden to both the lead character and the viewer, but as the story begins to unfold, and the character's inner turmoils are revealed, we learn a great deal about why she is so loud and vivid, though it is never fully explained in great detail. It's a nice mix of subtlety in its revealing of what makes its characters who they are and leaving some of the background up to the viewer's imagination.

As I said before, while Yu Aoi gives a wonderful performance and giving it her all throughout, I couldn't help but be off-put by some of her character's brash and impulsive decisions. She bonds with animals and is fascinated by the mating dances and rituals of the various creatures at the zoo she works at, and while I get that the film is expressing her desire for true freedom similar to the way in which that animals boldly reveal themselves to one another, and that like these caged animals, she too is trapped inevitably, I couldn't get over how insanely absurd her many outburst were. I've known a couple people similar to her in certain regards, but to the level and more so the amount of times she lets out a barrage of bloodcurdling screams and flips out on Shiraiwa, I couldn't help but find myself being annoyed with her character at times. Perhaps it is intentional, and there is something I missed, but it takes the raw and believability that works to a great degree for its many characters, including her's the majority of the time, and shatters it in spots, ultimately taking you out of the experience. 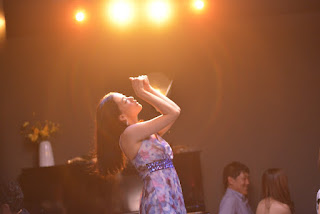 In the end, Over the Fence is a fantastic examination of people who are struggling to rediscover themselves after some sort of loss or suffering that they are undergoing and how it effects their day to day lives. With a minimalist aesthetic, Nobuhiro Yamashita lets strong visuals take a back seat and instead allows the actors  to truly shine and take control, which works for a film of this nature, driven by its strong characters. There are moments of beautiful imagery, during key moments, though sometimes they tend to clash with the laid back visual motif the film is going for. As an absolute powerhouse of a drama, this film is quite powerful and bold in its realistic depictions of its complex characters and will long stick with the viewer after the credits have rolled. Highly recommended.