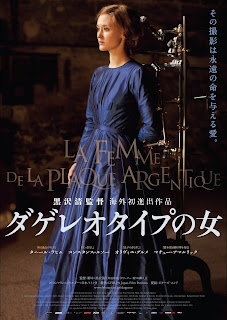 Kiyoshi Kurosawa has become not only a household name in the horror community, but has made a name for himself in the art circle as well and as a filmmaker he has been branching out of his usual genre of choice for the past several years now. Continuing to venture out from his regular choices, though being seemingly familiar once we get to it, Kurosawa has crafted a piece outside of Japan for his first non-Japanese language picture, to France, with the chilling romantic ghost tale, Daguerreotype a.k.a The Woman in the Silver Plate.

A middle-aged photographer named Stéphane works in his basement taking life-sized daguerreotypes of his daughter, Marie. He is in mourning due to the passing of his wife, which apparently had happened some time ago. Looking for work, a young man named Jean soon finds himself in the large mansion of Stéphane's, being recently hired as his newest assistant. Jean is quite unfamiliar and uneducated in the field of photography, but he quickly takes an interest when he is drawn in by the illustrious art behind the work put into these large pictures. These photos are burnt into large silver plates and create an almost mirror-like image once produced. It is an intricate process and Jean is only further intrigued by this process when he begins to develop feelings for the alluring Marie. When the process behind the photo, which includes strapping their model to a mechanical device that forces her to hold her position, begins to take a dark turn and the lengths in which she is held in place while the image develops reaches a disturbing level, Marie and Jean start to look for a way out of this madman's inescapable house. 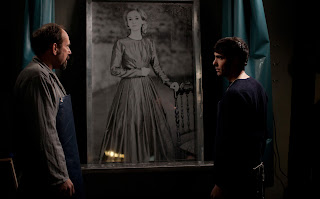 Daguerreotype is an incredibly well-crafted ghost story. The lingering spirit of Stéphane's wife comes into play throughout and that is the chunk of the film which need not be talked about for fear of spoiling. The film is absolutely beautiful to look at. Kurosawa has always had technically fantastic films and this one is no exception. The production values on display are quite high, from the lush visuals, to the excellent set design, to the effective editing using long takes that give the overall feel a notably eerie atmosphere. Every frame, no matter how bright or beautiful, has a sense of dread lingering over it. There is always a feeling that something is just around the corner, not being entirely sure when something will crop up to stir the butterflies in your stomach. It's this feeling of discomfort that Kurosawa has always done so well. This film reminded me of one of the director's older outings of the same nature, Retribution. The ghost element which is a staple in his films is very present here, but it brings in the romanticized nature of that particular work in general.

The performance by the trio of leads are all solid, with Constance Rousseau being the standout as Marie. She is trapped in this large prison with her father and you desperately wish to see her escape. It's as if she is obligated to stay and comfort her father, but in reality it would probably be quite easy to run, regardless of how scary he can be. Rahim is quite reserved in his turn-in as Jean. He is quiet and mainly observant of this bizarre world he finds himself in, but it works and is effective as a vessel for the story to unfold around. His better moments come from the latter parts of the film. If I had to complain with the acting it would be with Gourmet. He is quite good at times as the broken father in mourning, obsessed with his art and recreating the beauty his wife once presented him with on a daily basis. Unfortunately he cranks up the melodramatic outbursts to a laughably bad level at times. Key moments left me chuckling instead of in chills, in large part due to his obnoxious rage. 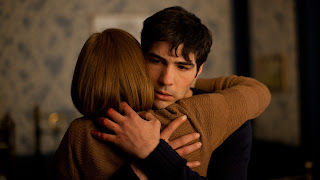 In the end, Daguerreotype is a chilling examination of obsession and love coupled with some of the tropes that have worn out their welcome in a Kurosawa film. It's still done quite effectively for the most part, though the familiarity is a little too typical for its own good. The film stumbles at times and some of the logic just doesn't add up later on in the movie that completely took me out of the experience and barely was able to reel me back in. It's most certainly well made and has some fantastic moments, but overall left more to be desired. A solid outing nonetheless but is most certainly not a standout of the filmmaker's already fantastic body of work.