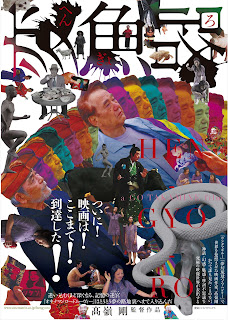 This film is as mesmerizing as it is confusing. I could follow the story, to a degree, and understood what was going on for the most part with the actual plot itself, but to say the hidden meanings and symbolism went over me more often than not is an understatement. What I do know though is that Hengyoro a.k.a Queer Fish Lane thoroughly impressed me through its masterful experimental craft done to perfection through great labor and love by Go Takamine, whom unfortunately until now, has went under my radar. Seeing this film, not only have I the desire to seek out more works by this madman (genius), but I have question the lack of creativity in cinema comparatively to this bonkers journey.

Essentially, if I even understood correctly, the story these two old men who are best friends continue to exist in a place named Patai village, where they have both failed to die of natural causes. The majority of this place was obliterated due to the Shima 'pshoo' incident, which is never explained at any point in the film, but brought up throughout conversation quite frequently. There are a few who exist in this mysterious and isolated place steeped deeply in indigenous folklore and other sorts of oddities that can't quite be comprehended fully. A local store owner accuses the two gentlemen of stealing some mysterious substance, which is illegal in their world, from his building and they find themselves on the run. Meanwhile all of this is happening, three women who are dripping wet (all the time), begin following them, going on about things that made no sense to me whatsoever.

Having a film confuse me to such a great degree is truly a compliment. It's impressionistic and up for plenty of interpretation. Unfortunately I wasn't able to delve deeply into philosophy as I watched fore I was too distracted by the insane visuals that rapidly unfold onscreen non-stop for the entirety of its run time. As an aspiring filmmaker who has dabbled in experimental short film, this film blows my mind with its creative and innovative techniques. The greenscreen is some of the best use I've ever seen and the constant change of framerate and ever morphing shifts in visual storytelling accompanied by some weird but effective comedy make this a truly one of a kind experience. To make things even better, Missler (the antagonist of the show) is one of the coolest cats in cinema history, that much I can confirm, with confidence.

There is seemingly nothing to complain about here, although I think deconstructing and even to a degree trying to criticize a work like this is detrimental and counterproductive to the piece itself. Aside from very amateurishly slapped together student avant-garde or experimental work, like my own student efforts, I think trying to constructively critique a work of this nature almost makes no sense. I wish to simply praise this film for its craft, and if I ever journey back and can delve in deep and try to analyze, then perhaps a true write up could be had then.

For now, as it stands with my current experience, I must recommend Hengyoro to all movie goers. Sure, some will immediately write it off for its sheer weirdness, but for those looking for something different and an experience versus your typical conventional narrative, this is one to be sought out. It truly makes for a cinematic experience like no other. A true oddity of an odyssey. For those interested, I can't recommend it enough.