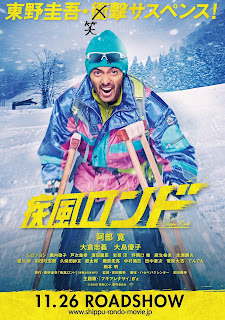 Hiroshi Abe is a senior researcher at a university lab named Kazuyuki Kuribayashi who is sent to a large ski resort in the mountains by his boss (Akira Emoto) after a fellow researcher discovers their successful, albeit accidental, harvesting of K-55, a strong and highly illegal biochemical weapon. With his job on the line and being a single father who is trying his hardest to provide his son with a bright future, Kuribayashi heads out to the icy mountains of Japan's largest ski resort ever constructed. Will he be able to find this chemical that has been buried deep in the snow, or will his race against the sun lead to the peoples' impending doom?

Sadly, that sounds way more exciting than it actually is. Shippu Rondo is a comedy that fails on all aspects and never manages to take off, in any real direction, delivering comedic misfire after misfire and, like the recurring and cringe-inducing joke of Kuribayashi falling flat of his face, this movie does just that and never manages to stand out its own two feet. I went into this one with high hopes. The trailer was fun, and Hiroshi Abe is one of my favorite working actors today. Not only is he a phenomenal dramatic actor, but he has proved that he successfully do comedy and deliver the laughs in spades. Thermae Romae is a completely over-the-top and absurd film that delivers the goods and in a sense I was hoping that this would be the next big comedic achievement for Abe. Unfortunately that isn't the case here because as I said before, this movie attempts to fire off on all cylinders, but all of those cylinders backfire and it isn't pretty.

The #1 thing in a comedy besides the characters, all of whom are flatly written and poorly fleshed out rendering them ultimately unmemorable, are the jokes. The laughs meant to be delivered here go for the physical gag route, which is fine. For some reason though, they only came up with one joke, and it's basic beyond all means: falling. Hiroshi Abe likes to fall down, a lot. He slips and busts his rear on the floor when leaving for work in the opening scene due to his son getting wax on the floor from giving his snowboard a new sheen. I chuckled, as it was funny, at the time, and then it went on to do it again once he arrives at the ski resort and straps himself in for the first time "since he was a teenager". A small girl near him, skiing like a champ, points out his bad skills and not even thirty seconds later, he takes off and falls again, and again, and so on throughout the remainder of a film. I guess the only positive I can give the awfully repetitious attempt at a laugh is at least it wasn't a fart joke. In fact, there were no fart jokes whatsoever, which is surprising as Shippu Rondo doesn't seem to be above the idea of letting one rip for laughter's sake. I mean the payoff joke is something else, but I won't spoil in case there is that one person that actually wants to tread through this steaming pile of a film.

Dialing it back a bit, the characters are totally one-dimensional. The son doesn't like his dad because his dad works all the time and doesn't listen to him... and it goes nowhere except to a cliche payoff in the end and that isn't spoiling anything. There is a love interest with the son from almost the beginning of the film that feels entirely shoehorned in. There are two characters introduced at the resort: a man, who is a rescuer for people who travel too far off the provided paths, and a woman who is trying to be a medalist for snowboarding. They too have an awfully generic character arc together and another budding albeit forced romance going for them. For Hiroshi Abe's character, well... he mainly just sits around trying to figure out where the chemical is buried, but stays primarily confused and when he rarely gets an idea, he just falls over for comedy's sake yet again.


Visually speaking, the film looks okay. It's generically shot and doesn't really inspire to be anything more than just passable. There are some go-pros forced into the action at some point that provides for some decent shots, but the way in which it is poorly incorporated into the story itself just left me shaking my head as well. There are some awful slo-motion shots during the "big" action scene towards the end too that look like something that belonged in a cheap TV drama. I really wanted to laugh, but the elementary humor only ever managed to muster up a couple of brief chuckles, mainly out of obligation of the fact that a comedy was playing in front of me. I didn't want to be completely rude.

I think it's pretty obvious that I didn't like this one. The jokes are poorly executed and very repetitious, and all of the characters, no matter how large or small to the story, were badly written and accompanied with some pretty phoned in performances. I imagine Hiroshi Abe got a pretty decent check for this because I couldn't fathom him doing it for any other reason. I so desperately wanted this to be a comedic hit, but sadly it flies far off the slope and hits the icy rock bottom only to be forgotten in the frozen abyss. Avoid like the plague.