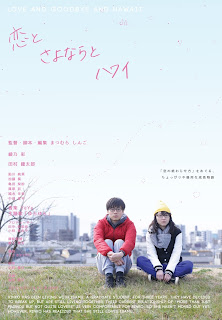 Finding yourself in the process of breaking up with a loved one is hard to do, especially when feelings may still be lingering about from one or potentially both of the people involved. Rinko finds herself in this situation with her boyfriend of several years, Isamu. The two are comfortable around each other and enjoy the presence of one another still. There are no awkward moments or tension in the air and Rinko is allowed to stay until she can afford to move into an apartment of her own. The only thing of this whole situation that is unusual is that none of her friends are in the loop on this breakup. Love and Goodbye and Hawaii delivers are warm romantic comedy with just the right amount of subtle drama that delivers the best picture of this nature so far this year and in fact one of the finest films of 2017 period.

After the opening scene, Rinko and Isamu set out during the brisk morning weather to go for their daily speed walk around the town. There is a certain playfulness in this scene that plays out through the entirety of the movie that never crosses the line into the realm of cheesiness or disbelief with the characters and their genuine emotions that come to the forefront when things get serious. The movie is funny and light but also doesn't shy away from dealing with the inevitable confrontation between the moving on with his life Isamu and the lingering and perhaps still in love Rinko. It tugs at the heartstrings, but never results in melodrama nor the cliche major breakdowns that happen often in these types of film. I can't stress enough how much the subtle nature of the drama here is appreciated. It's still very true to life and sure there are loud moments between couples at times in real life, but the mutual respect that both of the characters have for one another feels genuine and always lives up to that strong foundation the two have built as friends over the years. 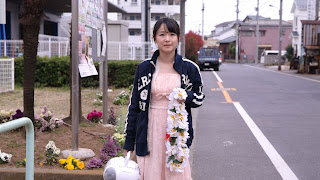 One of the plot points that carry on for the majority of the story is Rinko's desire to travel to Hawaii. She was sick during the last opportunity that she had, but is more determined than ever to venture out the the tropical state before she exits her ex-boyfriend's place of residency. While seemingly unimportant initially, the tie in with her trip to Hawaii has a payoff with her character arc and adds a nice standout element to the film. Watching her practice Hula dancing with her friends is a true delight and brings out some of the best moments in the movie.

Technically speaking, Love and Hawaii and Goodbye brings some gorgeous imagery throughout. It has some more traditional composition during its dialogue driven scenes, but there are plenty of nicely framed shots and sequences scattered about in between these conversations and several wonderfully edited moments, especially during the walking commutes our two leads go on multiple times. Many shots linger in my mind, but I wish some of the more stylized visuals would've appeared more often. It's never showy with its visual storytelling, but the creative framing and cutting dial it back a bit too much when the lengthy conversations occur. It still looks fine in general, but the shift was noticeable between the two styles, though never jarring to the senses.

The performances here are worthy of praise as well. Aya Ayano is a delight as Rinko. The way she carries and expresses herself is delivered with a great amount of sincerity. Her feelings remain for Isamu but she leaves them suppressed without having that over-the-top explosion that plagues most romcom affairs. Sure part of that surely stems from the great writing of the screenplay, but her performance is wonderful regardless. Played excellently by Kentaro Tamura, Isamu is the perfect counterpart for Rinko. He is loving, but his passion fall more towards his work. He is funny as well and the chemistry between the two is excellent. Again, the performance here is great, but I think the screenplay has to be praised for such a well-rounded and believable couple.

I could go on and on about this one, but for sake of losing myself in a lengthy ramble, I'll end here by saying that Love and Goodbye and Hawaii is one of the movie highlights of 2017. Director Shingo Matsumura delivers an excellent romance film that takes a realistic but playful approach to its couple at hand. It never gets too loud and feels breezy with its lovely array of characters and excellent performances all across the board, making this is easily one of the best romance movies in recent years. It's one to appeal to casual movie goers and cinephiles alike with his its charm and great replay value. One that's sure to be revisited and appreciated several times in the future. A true delight!