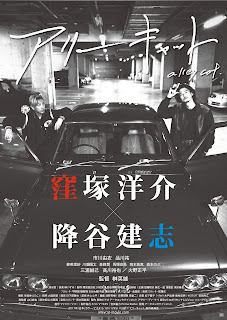 Hideaki Ashita (Yosuke Kubozuka) is a former boxer who spends his current days working part-time for a security company. His career comes to a sudden halt when he nearly loses his life from an extreme head injury. He now carries on with the aftereffects of this injury, which could potentially be the end of him. Returning home one day, Hideaki realizes his cat Maru has gone astray. Whilst searching about for her, he finally finds her in the arms of an orange-haired mechanic named Ikumi (Kenji Furuya). He claims that the cat belongs to him and that her name is 'Lili'. The two are naturally drawn together as they debate who this feline really belongs to. After forming an unexpected friendship, the two are thrust into the dark underworld of Tokyo after Hideaki takes a job as a bodyguard that goes terribly wrong when a woman named Saeko (Yui Ichikawa) is taken away due to her dark past that can't escape her. Things go from funny to intense as this unlikely duo descends directly into the mouth of hell. 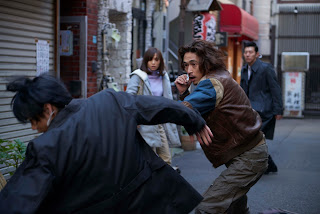 Alley Cat is without a doubt one of the biggest surprises of the year for me. Initially my expectations were relatively reserved to say the least and when all is said and done I believe this will make a best of the year list in some months down the road. It's an excellent and refreshing take on the buddy genre that has sort of played itself out almost worldwide over the last decade. America cranks out these over-the-top actioners featuring the quirky pairings that you wouldn't expect. This film does that as well but it instead opts out of ridiculous and goes for a gritty and more grounded approach to its action. The stakes are high and very real here and all of the subsequent actions that follow suit tend to have equally real consequences. You quickly realize the world that Hideaki and Ikumi are heading into is a dark and scary place, chalk full of heinous beings ready to off you at any second. Overselling it is not my attention, but for a film of this nature, it was just nice to see that things really feel dangerous for our heroes when the inevitable s**t hits the fan.

Pulling things back a bit, there is a hilarious and dark tone to the entirety of Alley Cat that works in the picture's favor. The situations the two find themselves getting meddled in the midst of and the reactions they have are all quite hilarious and add a sort of realistic approach to how actual people would react in these unlikely situations, such as having attackers that are almost like assassins show up to your workplace and so on. Not to mention Yosuke Kubozuka and Kenji Furuya have some of the best on-screen chemistry I've seen since back in the 90's when Chow Yun-fat and Tony Leung set the bar at its highest with John Woo's bromance epic Hard Boiled. The ups and downs are all handled with care here and they make the heart of the film, bringing everything to the table through their wonderful performances. These guys genuinely click with one another and had me cracking up with their every interaction and banter. I mean, they call each other by what they named their collective cat. Maru and Lili are the dynamic duo to beat this year, and that probably won't change anytime soon.

Another thing that surprised me was how well this film was directed. I honestly haven't seen a single thing that Hideo Sakaki has directed, but if this is any indicator of overall quality, I must find the time to trace back through his body of work. The lighting in this ranges from natural to a very noir-esque style when the company makes their way to Tokyo. Some of the sound effects through the many punches that are thrown throughout were a bit questionable and I noticed some stock sound clips of cat meowing being mixed in, but I think those are more nitpicks than anything, but bothersome enough that they should be pointed out. Also, speaking of the punching, Shinichiro Matsuura (boxer turned actor whom still is very involved in the community) has a very brief cameo. I'm assuming he helped with the boxing choreography naturally.

When all is said and done, I had no idea what I was getting myself into with this one. It was so refreshing to see a film of this nature play out the way in which it did. It never held back from realistic violence which worked greatly in favor of the overall grittier tone. The humor was spot on and quite dark, and aside from a couple of choices in the end in which I think is just digging into and picking apart to the craziest degree, Alley Cat has not only genuinely surprised me, but has become one of the biggest gems of the year. This has the potential to do well outside of its home country and is one I hope to see it being swept up for distribution abroad. One of the year's best no doubt and most certainly one of the finest buddy action flicks in years, this one comes with my absolute highest recommendation!