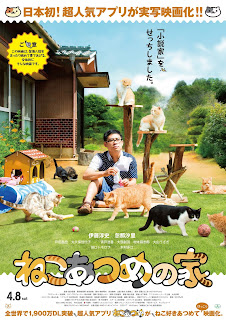 So, a Neko Atsume movie happened. Never thought I'd say that, even with the massive success of the game internationally, I was just instantly baffled that a game where you set out various food and toys to have cute cats comes visit you periodically, could ever be adapted, and for that matter into a film of all things, but he we are and I must say it is a lot better than I thought it would be going in, as it is quite obvious that I was fairly skeptical.

Neko Atsume House tells the story of a best-selling novelist, Masaru Sakumoto, who has recently been struck by somewhat of a dry spell creatively. He cannot bring himself to write anything, no matter how hard he tries or is even forced into doing so by the company that sponsors him. Quickly things begin to fall apart for Sakumoto, including his reputation as a writer, and highly stressed and down on his luck, he takes the advise of a local fortune teller, and moves out of his apartment to a house in the countryside where, you guessed it, he begins to be visited by some cats and his interest in these adorable felines begin to change him as a person.

I enjoyed this movie overall, but more so as just a "Oh look at the kitties!" distraction more than anything else. The main character of Sakumoto, played by Atsushi Ito, was done quite well by the actor, making the failed artist mostly believable and sympathetic. He could be annoying at times, but overall you really wanted to see the guy break through his artistic falling and pick himself back up to where he once was. There is a budding romantic relationship that begins between he and his assistance, though things aren't exactly how they are in other movies of this particular nature. There is another character introduced much later into the movie, and both my wife and I were wanting things to maybe go towards him liking her and visa versa, but not getting into the whole rigmarole of our own personal wishes. Let's just say the romance isn't the primary driving focus of the narrative and never quite takes a back seat, but on the same hand, it never fully flourishes, but that could be the point of it all I suppose. Nothing in this film ever feels important initially, but rather I guess the tiniest things do become so when looking at our character's arc and where he ends up.

The film does a nice job of wrapping things up in the end thematically, though the ideas and thoughts aren't really the deepest nor did I expect them to be. I think going into this movie, I was expecting to totally rip it to shreds given the nature of the project as a whole. I mean, I do own the game and have completed in the collecting of all the cats, toys, wallpapers, and such, but that wasn't going to sway me one way or another and the fact that I am putting this in the review just goes to show that even as a mild fan of the product it's based off of, I still knew even then that there isn't much you can do with the original source for inspiration. We do get nice images of all sorts of kittens and cats alike throughout, and if you are into that sort of thing, you will find much to scope out here.

On a technical level, the movie ranges from pretty, to awful, and back to pretty once again. It just manages to work on a basic level visually, but never has an oomph or style of its own to really make it stand out. It falls into the cesspool of every other movie that is just sort of passable. . . to be kind. Some of the earlier scenes really annoyed me to look at. I think the almost 'fish eye' lens was a poor choice. I believe that perhaps they were going for the character's distorted view of reality, but it just warped the picture and took me out of the drama that it very much failed to build up early on. Not to mention there is a lengthy one take shot of the camera tracking around the lead and the assistant in a circle at a nauseating speed that reminded me of the same amateurish shots from Versus, ultimately taking me out of what little absorption I had at the time.

To wrap things up, the first half of the film fails to get going and almost becomes unbearably awful to sit through, but somewhere around the hour mark I found myself beginning to smile and be drawn in by the 'nekos' as our main character had. Not to mention, and this doesn't change my judgement of the film whatsoever, but once you realize that Sakumoto's boss in the film is played by none other than Tetsuo: The Iron Man himself, Tomorowo Taguchi, then you must state it upon all future mentioning to anyone, ever. Joking aside, I think this film will have its crowd, especially given the popularity of the game's audience, and not to mention that movies about domesticated animals tend to do decently well all over the world, and then I think it's a safe bet to say that the people who will enjoy this one already know who they are. I wasn't a huge fan myself, but I won't deny that it does eventually extrude a large amount of charm, it's just unfortunate that it takes so long to get there.