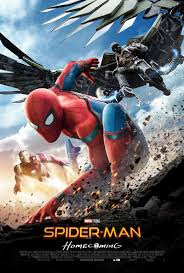 Third time’s a charm right? As the third version of Spider-Man that mainstream audiences have seen in recent memory (with Sam Raimi’s Spider-Man being one of the films to truly kick off the box office obsession with superhero films back in 2002), Spider-Man: Homecoming had a lot of things that could have gone horrifically wrong with it. Could is meld the Sony and Disney/Marvel production concepts? Would audiences accept another new cast and “soft reboot” of the hero when both of the previous incarnations crashed and burned with fans and critics in some weird ways? Yet, as surprisingly unsurprising as it is, Homecoming not only looks to dominate the box office, but it’s a remarkably good Spider-Man film that strikes a great balance and manages to fix so many of the issues that were bogging down the last series of films. It’s light-hearted, fun, and ultimately stripped down of the melodramatic densities that this figure had accrued over the last decade and a half. Enough so that it, even compared to other MCU properties, seems a bit refreshing if not occasionally too consumable. With a few flaws in tow, it’s hard not to appreciate the execution and intent of Homecoming for what it is and how it succeeds in that manner.


Peter Parker (Holland) is still adapting to his new superhero identity, Spider-Man. However, now that he has a bit of guidance and tactical help from Tony Stark (Downey, Jr.) he feels like he can do anything. Yet, it has been months since he helped out Stark with the rift in the Avengers and he hasn’t been called back up to help with anything, so he keeps on battling it out  against common thugs in New York. When some serious weaponry starts hitting the streets and a winged mechanical villain makes his appearance, Parker feels like he has to step up to the plate…whether he’s ready or not.

Say what you will about the formulaic nature of the Marvel Cinematic Universe, but that kind of structure and focus did this film a lot of good. Where the last incarnation of the character was horrifically drowning in its own attempts at creating a universe with useless conspiracies to boot, Spider-Man: Homecoming goes for a “less is more” approach and it’s shockingly effective. Sure, there is certainly a romantic subplot, ties to the Avengers and the MCU, and some spectacle driven action scenes to go along with it (including an invisible plane), but the film strips things down at the foundations. This is a film about a young kid learning responsibility and how to balance life. It’s the coming-of-age concept at the heart of the film that truly makes this one easy to understand and fun to watch. A perfect combination for a third introduction to a character that’s common knowledge to most of the cinema going audience anymore.

Of course, it also helps that the execution of the film is impressive too. Jon Watts, whom delivered some fun gems in genre films like Clown and Cop Car previously, handles the focus and balance of the film very well. Homecoming has a ton of charm to ride on, thanks to some gung-ho performances from an energetic and heartfelt Tom Holland and a remarkably dark and down to Earth turn by Michael Keaton as the winged villain Vulture, and those are key to making the film fulfilling even in its simplicity. We like to watch Peter succeed and root for him to overcome his failures. Both Jon Favreau and Robert Downey, Jr fit into the plot smoothly (perhaps my biggest concern going into the film is that they would be kind of shoe-horned into the film awkwardly) and while some characters don’t get a lot of screen time to dig into, Aunt May is one of those, they all make it memorable and fun while they are there while never detracting from the main bones and heart of the film.

Yet, I think perhaps the secret weapon in Homecoming’s success is the tone. The trick about Spider-Man films is that they need three things in perfect balance: youthful drama, comedy, and action. Sam Raimi came out of the gate with a strong balance for his films and Homecoming comes as close to nailing it as we’ve seen since Spider-Man 2. The film has romantic and familial drama, but not enough to be sappy or depressing. It has plenty of one-liners and comedic moments, but not too many to feel forced. It has tons of high-flying action, but it’s not a film that has end of the world spectacle. Watts and his team of a thousand writers get a strong sense of tone and balance that gives the film a big beating heart, great entertaining charisma, and exciting action, but never too much of any of those to lose the equilibrium of the entire thing.

Spider-Man: Homecoming is not perfect and could easily have trimmed a few moments and expanded others to hit some of the emotional beats and focuses a bit stronger, but considering the cluster-hell that this film could have fallen into it’s hard not to be overly impressed with its bright and colorful approach. The film may lack the big emotional payoffs of some of the Marvel films (it doesn’t even quite hit the strong elements of Guardians of the Galaxy Vol. 2 from earlier this summer), but it’s simplicity in foundations and strong balance of the key Spider-Man elements make it a refreshingly fun and entertaining film. Fans of the character or the MCU should definitely put their hesitations aside and web-sling into this one with an open mind. Easily one of the best Spider-Man films to date.

Written By Matt Reifschneider
Posted by DarkReif at 3:05 PM