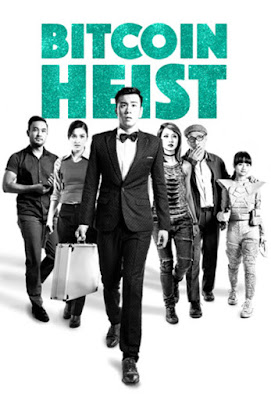 After the breakthrough films Clash and The Rebel, there was a sense that the Vietnamese film industry was ready to break out into the international market with its brand of high octane action flicks. Yet, after that there wasn’t much from the area that was seeing the light of day for most of us Westerners. A shame really. That is, things seemed quiet until Bitcoin Heist. This latest caper film, directed by the editor of the previously two mentioned films, is the kind of cinema to get the world to take notice of the Vietnamese industry again. It’s big in its scope, slick in its production values, and features a smooth consumable nature that blends the style of the industry with a more international flair. To add to it, Bitcoin Heist is a ton of fun to watch. It’s massively entertaining and impressively executed. Truthfully, I had no idea that the Vietnamese industry could produce a film of this Hollywood-ish style and I have to admit that I was hooked almost immediately. Bitcoin Heist is the kind of film that launches the Vietnamese scene up into the realms of where South Korea and China both reside currently and that’s a statement for everyone involved.

Dada (Kate Nhung) has been assigned to take down the elusive hacker The Ghost, but when a sting operation goes awry all she is left with is his accountant Phuk (Thanh Pham). Phuk is more than willing to help her catch The Ghost, who dabbles in stealing and dealing in an online currency known as Bitcoin, but they need to put a team together to do it.

Truthfully, it’s not like Bitcoin Heist is all that original. It’s essentially Now You See Me with hints and heist elements of a Mission: Impossible flick. If either of those films rub you the wrong way, then it’s an easy suggestion to just say skip out on this one. However, if you like the slick production values, quirky characters, and tense (if not over the top) elements of either of those than I highly suggest giving Bitcoin Heist a gander. The film is full of big elaborate tricks and narrative fun as it establishes its team of misfits and thieves (one is even a magician and those kinds of tricks feature predominately in many sequences which is where a lot of the Now You See Me style comes into play) as a tense family looking to take down a more ruthless and perhaps clever villain in The Ghost. The narrative, while playing out in a very consumable manner, is all about getting the audience to look one way and hitting them from the other while injecting its fair share of espionage thriller elements and smaller action moments. The film does an admirable job of getting it all to flow together in a cohesive manner, feeling natural in how it unfolds its heist and the robust twists that happen after the fact. It relies a bit too much on a few gimmicks at times, but ultimately for a fun film of this nature it really does work and entertains to full effect.

However, it’s not the fluidity of its narrative or plot devices that make Bitcoin Heist the shockingly effective film it is, it’s actually the quality of the production and execution of those pieces that makes this so pleasantly surprising. Of the previous Vietnamese films I’ve seen, there is always a rough edge to them and a bit of a low budget tone that gives them more of a cult feel. Yet, director/writer/editor Ham Tran brings big visuals and big production values to bat in this film. The performances are all charismatic and fun, particularly from the various members of the team that have to pull off the heist, and outside of a few odd moments including the gritty tone the opening gun fight takes, Bitcoin Heist looks and feels like a Hollywood or South Korean production. It’s visually tight and spares no expense on its international sets and locations. It uses its humor to benefit the performances while never detracting from the more dramatic and emotional beats. The director knows how to balance it all. Even when the film gets more predictable or tends to drag out a bit in the finale, the execution of its ideas is top notch material.

The expectation going into the film may not have been sky high, but Bitcoin Heist pulls off a remarkably fun and exciting caper flick that uses its slick production values, smooth writing, and charismatic performances to maximum effect to deliver the thrills and laughs. It’s a massive surprise for the year when it comes to action thrillers and it’s the kind of film that shoots a flare into the sky to indicate that no one should write off the Vietnamese industry yet and that with the right artistic talent and backing they can go to bat with the big box office flicks of the other foreign markets. If you’re a fan of these kind of quirky heist thrillers, I cannot suggest Bitcoin Heist enough. It just may steal your heart.