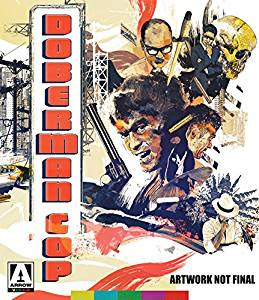 Arrow Video has been on a legitimate Kinji Fukasaku streak lately, delivering iconic releases of some of his strongest films (Battles Without Honor and Humanity, Cops Vs Thugs) and giving the US and UK a chance to see some of his overlooked and more obscure films. In this case, the oddity that is Doberman Cop. Featuring the deadly duo of Fukasaku as a director and Sonny Chiba as a star, Doberman Cop is one of those films that without one (or both) of these elements it may have failed miserably, but since it has both it remains a strangely fun and massively entertaining cops and criminals action flick with perhaps one of the most eclectic scripts that I’ve seen from either. Certainly, the film is flawed thanks to a shifting momentum and focus on being off beat and occasionally more comedic than I’m sure it was intended, but Doberman Cop also has some very impressive moments that shine for fans of the era or genre. It’s a bizarre blend, but one that’s sure to entertain more than anything else.

Kano (Sonny Chiba) has been called up from his small and rural island town to help with a police investigation in Tokyo. A woman from his island has been murdered and the body burned, but they need him to help identify that it truly is her. When he claims it’s not, with only circumstantial proof, he heads out on his own to find out what happened to her and why someone wanted everyone to think she was dead. The country bumpkin cop is going to have to deal with the threats of the yakuza and, worse, show business to uncover the truth.

The 70s were a strong time for Kinji Fukasaku, but until around the time of Doberman Cop he stuck strictly to yakuza and police thrillers. This film essentially marks a director looking to spread his wings a bit and it feeds into the eclectic nature of this film. While the manga it was based on is much more of a traditionally told story about a super cop, Fukasaku’s take on the character is much stranger and probably a more interesting one. Powered by the sheer screen presence of Sonny Chiba, the film centers around him as a ‘fish out of water’ story concerning the often intimidating and fast paced world of Tokyo as he must dig into layers of society that he is not familiar with concerning the music industry, gangs, and an overbearing police force. Because of this angle, Doberman Cop throws a lot of various styles at its audience. Biker gang aspects, musical numbers, and Fukasaku’s bread and butter cops n’ robbers and make appearances in the film. All the while, it maintains an edge of comedic value as this “country bumkin” tries to sort through it all while everyone else keeps telling him he is out of his element. It’s a rather intriguing way to go about it, showcasing the fingerprints of a lot of entertaining genres along the way, but it is certainly incohesive. If the audience is not attentive enough to names and connections, it can be a chore to sift through. The film battles this with its sheer entertaining elements, but it is scattered and often uneven from scene to scene with one scene being remarkably tense followed by a scene of almost slapstick comedic intent.

With that, Doberman Cop has a secret weapon in its sleeve: Fukasaku and his team of regular contributors. Under his direction, the film seems to maintain its intent throughout the film and there are plenty of moments where one can see a brilliance underneath its big song and dance number of action, comedy, and thriller tension. The writing can be weirdly introspective and fun, including a reoccurring idea that Kano’s superstitious country values actually have weight to them, and the performances are fully fleshed out. Sonny Chiba balances the shifts in tone with a light foot and is game for pretty much anything including some big karate ass kicking sequences or carrying around a pig and chasing it through a strip tease number. The same goes for the secondary cast and Hiroki Matsukata, who portrays the evil yakuza villain intent on breaking into the music industry with his latest hit singer, adds an air of darkness to the entire film and comes off as impressively threatening in many scenes that could have (and probably should have) been eye rolling and silly.

Arrow Video doesn’t sit back for this release either hoping that it will sell merely on its director and cast. The release itself is stocked with enough features to take fans for that extra mile and the high definition transfer makes for a solid watch, although I have no comparisons to make to previous releases as this is the first and only one I’ve ever seen. The features even include a new interview with the Street Fighter himself, Sonny Chiba, that fans will want to see.

While Doberman Cop remains a mixed effort in its writing and perhaps a bit too eclectic in nature for many of Japanese cinema’s more casual fans, the entertainment value of the film is otherworldly. It’s an enormous amount of fun, littered with some fantastic performances, and punctuated with striking moments that more than make up for some of its lesser sequences that stumble. Kinji Fukasaku and Sonny Chiba fans will definitely be interested in taking a trek into the world of Doberman Cop while cult cinema fanatics will certainly find enough to love to purchase this latest Arrow Video release. It’s not a film for the mainstream cinephiles, but for those looking for a new underground classic then it comes with a hearty recommendation. 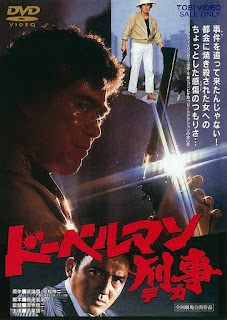 Written By Matt Reifschneider
Posted by DarkReif at 3:07 PM