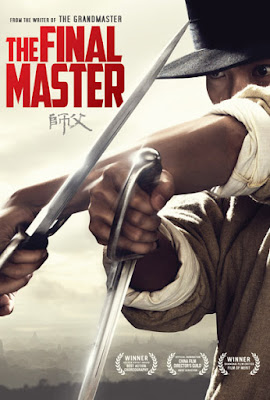 Xu Haofeng is the next big name in Chinese cinema as an artistic force to be reckoned with. In many ways, he already is as his most recent film, The Final Master, is an award-winning piece of cinema that is finally getting its US debut from our friends at Well Go USA. Yet he’s proven throughout his three films as a director, The Sword Identity and Judge Archer prior to this one, that he has an innate knack of being able to take classic Chinese cinematic traditions and inject them with a modern artistic merit that brings them to a new level. The Final Master is Xu Haofeng’s finest cinematic work to date. It’s not only a highly entertaining martial arts film that utilizes many of the wuxia foundations as a base to build itself on, but it’s a film that strikes out as remarkably diverse in its tone without ever sacrificing the fluidity or depth of its narrative for the sake of making something entertaining for the masses. It’s a film that rides the line between the two worlds of cinema as art and entertainment while capitalizing on the successes of both. The Final Master is a brilliant display of inventive navigation of the genre and remains a film poignant and enjoyable in the best ways.

It’s a statement that he needs to make. Master Chen (Liao Fan) has to start a Wing Chun school in Tianjin and the sooner the better. However, to do so he needs to follow some very strict rules and the first one is to find a  local wife (Song Jia) to establish himself in the community and take a new student (Song Yang) to challenge the masters of the other schools to force their hand into allowing his school to open. When things start to unravel with the local military though in regards to the martial arts schools, Master Chen will find himself over his head with only one way out.

To understand how The Final Master works, it requires that one recognizes that it is established on two levels. The first level is that the film is a classic wuxia at its heart. This shouldn’t be surprising if one has seen either of Xu Haufeng’s previous films (both wuxia films) and this classic approach to one of China’s most distinctive genres is a prime foundation to build on. If the film is broken down to its bones, it hits all the key wuxia elements. The wandering swordsman, in this case a Wing Chun master skilled in knife work, must navigate a series of formidable foes in the form of various other masters of their arts made iconic in how the film uses its alley fight finale as a perfectly toned and effective gimmick. There is a secondary plot of romantic intrigue, traps are set by increasingly vile villains, and themes of loyalty and betrayal punctuate the emotional core of the film. It’s littered with classic style fight sequences, including a street fight with thieves or more traditional one on one battles between the Master’s lone student (played with scene stealing charisma by Song Yang), and it weaves between its action, drama, and humor with flair and natural flow. Fans of the genre are guaranteed to love the fantastic and realistic choreography of the film and the characters are genre tropes without any of the ‘been there, seen that’ tones to keep it from being lifted above its execution.

It’s an execution that represents the second level which The Final Master works on. Xu Haofeng’s writing style, while resting firmly in the genre’s elements, works in a smooth manner that floats between important moments in a stream of consciousness manner without falling into the trappings of the narrative structure. Xu Haofeng was the writer on the critically acclaimed Ipsploitation flick The Grandmaster, but where Wong Kar Wai embraced a dreamlike quality of its narrative, Xu Haofeng never reaches into realms of pretentiousness with how he approaches it and it’s remarkably refreshing and deep without sacrificing the entertaining and grounded elements of the characters and story being told. The Final Master is further grounded by phenomenal performances from all of its cast, although it’s hard not to give massive recognition to Liao Fan who embeds a complex layered character as the titular Master, and that entrenches nuance and meaning to many of the more predictable moments are The Final Master goes through the wuxia requirements. A prime example of this is just how effective the romantic plotline is between Master Chen and his wife works without ever caving into the melodramatic moments (defending her against street thugs for her purse) and giving each character a growth arc that works in conjunction with the romantic plot and the larger plot of the wuxia story.

For those people out there that enjoy classic Chinese cinema or love wuxia style tales, then one ought to look no further beyond The Final Master. For those others who find the style of either of those cheesy or outdated in a modern cinema landscape, also look no further beyond The Final Master. It’s the perfect balance between using its classic wuxia foundations and modern artistic style that makes this film so impeccable in its heart, characters, and action. Not only is this one of the best martial arts films to be released this year, it’s easily one of the best films of the year…period. Do yourself a favor and submit to learn from The Final Master.