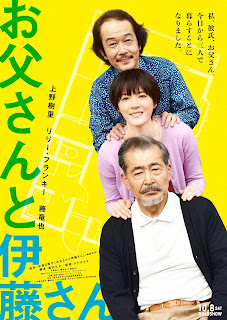 A woman named Aya (Juri Ueno) and her boyfriend 20 years her senior, Ito (Lily Franky) live happily together in a relatively small apartment in Tokyo. Things seem to be going well between the two whom met at a department store they had once worked at together. Life is peaceful and quite enjoyable for this couple, but one day out of the ordinary, an elderly man, none other than Aya's father (Tatsuya Fuji) himself, shows up at their doorstep with his personal belongings, and moves in on his own accord. Suddenly the picture perfect life that Aya and Ito had built up for themselves starts to unravel. Can these three people of varying generations truly coexist together or will this old man be the death of them?

Okay, so perhaps the build up is a bit exaggerated but point in case is that Aya's father is a very old man with a very fiery personality. He's set in his ways and he lets them and everyone in the whole area know that he is a force to be reckoned with. Old school is an understatement in his mentality, and given the already large age gap between Aya and Ito, this only adds another element to form a truly interesting dynamic between this trio of people. The characters are the driving point in this otherwise fairly shallow narrative. It's not that there isn't a story, there just isn't much of one, but that is okay as this is in favor of a more slice of life style film. It's a family comedy with a dryer sense of humor, but the feel good tone overall will be one of the major points of appeal for My Dad and Mr. Ito. 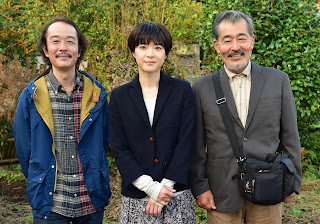 The biggest compliment I can give this movie as a whole is that it is filled with excellent performances from its trio of leads. Juri Ueno as Aya, the brisk and independent woman whose life comes quickly under fire from her feisty father who ridicules and critiques her over every minute detail of her existence. She is funny and you really want to see her patch things up with her father, though it seems that it may not go that way for the two. Lily Franky is a delight as usual with Ito. He is older, very wise and has a great charm that really balances out the tension between Aya and her father. His gestures and quirks are seemingly small, but he adds to an otherwise simple character that may have suffered to bring anything to the table if put in the wrongful hands of a less experienced performer. As the film rolls on, you start learning more things about his character, and there is a recurring joke that he is secretly an undercover detective according to Aya's thoughts, and well, that really kept me laughing throughout. Finally, Tatsuya Fuji is a riot as the hot-tempered father of Aya. As I said before he is very much set in his ways and the manner in which he bickers and complains about everything kept a large smile on my face. I think Mr. Fuji is a brilliant actor and it is great to see him still shining front and center. You aren't completely annoyed by his doings and as things begin to be revealed about his character in particular, without spoiling, you really sympathize with this old hoot.

In terms of the way things are shot and lit, it's fine. Nothing is extravagant, but it once again doesn't really need to be here. It's passable and there is nice detail presented through some nicely framed close-ups. I guess traditionally shot is the best way I can think of how to describe efficiently. It's serviceable but nothing ever really stands out until towards the end of the film when a few stylized shots come into play. Maybe it's this drastic difference in composition that makes the more impacting shots all the more memorable. Unfortunately the beautiful strong images are few and far between, and the moments they do happen just left me wanting more in the end. I know not every frame needs to be jaw-dropping with lush imagery, but just comparatively between the memorable visuals, the rest of the film feels flat. 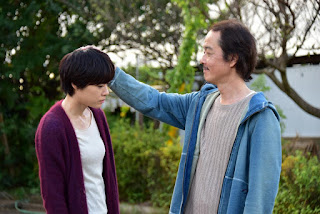 Overall, My Dad and Mr. Ito is a tale that downplays itself too much. It's fine in the end, but nothing is ever really that memorable. What it does have going for it though is wonderful performances, a very memorable ending and revelation with the characters, but it ultimately ends up feeling too carefree for its own good and sort of bloated in a sense with its runtime at least. At two hours, which typically isn't a problem for this movie goer, I just feel there should've been a little more going on. I don't feel its one I'll revisit anytime soon, but it's a nice one time viewing and will most certainly make for a great family movie. I recommend it to everyone at least once. It's quite solid, just sadly it doesn't do enough make itself truly stand out.