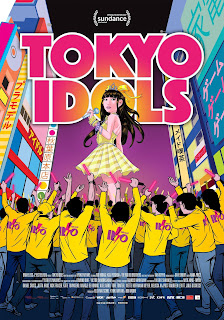 A fascinatingly chilling documentary that focuses on the young and upcoming idol, Rio. She is 19 years of age and has a small but loyal fanbase that seems to love her, quite literally. Interspersed with Rio's ongoing journey of rising to fame, we see a select few other idols, quite younger than even her that bring a disturbing look at society's sickening fascination with idolized youth. The level of obsession with celebrities and these young women that these men worship is the common thread that this film examines thoroughly in one of the most effective and haunting docs I've seen since perhaps Oppenheimer's Act of Killing.

Before we get this going, I'm quite aware that cultures are vastly different from one another and the idea of physical beauty and love itself is viewed to some varying degree, but there is no denying that what is going on here is not only disturbing but plain crazy in almost every manner. These young women truly believe that what they are doing is right, to conform to and project their beauty upon these broken men. In a country where women are still oppressed to an extent (insert country with greater oppression here), many think the only way to succeed and be celebrated is to go the route of becoming an idol. For those unfamiliar, in Japan an idol is a young girl, often between the age of 10-15, that dresses glamorously and produces pop music to perform on stage, in front of groups of 'fans', typically male, ranging from young adults to the elderly. In general these men in turn idolize and obsess over these young girls, often claiming some sort of love towards them, though they know typically that there is never a chance of anything actually ever blooming into fruition. 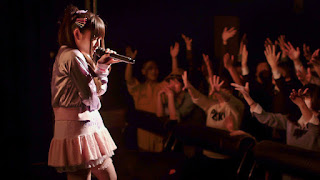 They are exploited by managers that help promote them and get them gigs. There are shirts made, cds produced, and other merchandise to keep the fans idolizing. Handshake meetings, which I was unfamiliar prior to this, are set up to allow fans to line up and spend ex-amount of seconds shaking the hands of the idol of their choice. If it is a group they are there to see, they get to make physical contact via this physical greeting to all of the members, which apparently comes across very sensually to many of these men. It's disturbing to see these younger idles being swooned over, especially the ones that aren't even yet teenagers. Of course it's shocking and grotesque in general, but to find yourself having a galloping heart over a child, I think there is something to say about society with this mindset. 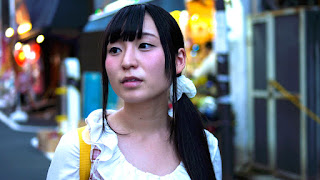 That's not to say that the film is just a barrage of showing how heinous and disgusting these fans are, but we also get an intimate look at our idol of focus, Rio, and her daily life. She puts a lot of work into fulfilling her dream of being famous, and while you do route for her and wish her success, you can't help but feel sorry for her as these fans constantly surround and worship the very ground she walks on. The amount of hard work she puts into her career is both admirable and disheartening. It's sad to see that she has to livestream and be in front of her fans every single day, for several hours. Privacy isn't an option for people seeking this lifestyle. She does keep a decent relationship formed with her parents, but human connection and general interaction with others is nonexistent in her daily life, except from her loyal fanbase. One of her fans in particular seems to be a nice person in general, but the level in which he makes sure that he is dedicated and loyal to her is somewhat off-putting versus admirable, which is what he is going for.

It does propose a nice question though, who is to say that we can't be happy no matter what, but what is that line which shouldn't be crossed and where do we draw it? Where is the cutoff point? Some of these fans feel like outcasts and that only these idols can be their saviors. Some feel as if these young girls and women lift them up and bring them into a state of happiness or inject them the courage to face the challenges of their daily lives. It's a magnificent examination of objectifying women within the music industry that raises many flags. Sure the music may be fun and catchy, but is the process behind the spotlight deemed acceptable? Everyone needs to seek this documentary out immediately. Easily my favorite doc of 2017.