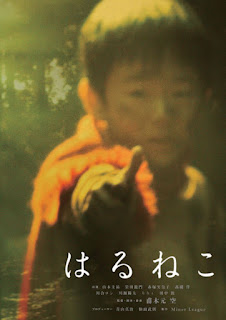 Set in an eerie isolated wooded area, deep in the midst of seemingly nowhere, one by one, people that wish to die arrive via a small white car to these woods, where they are then brought to a mysterious café amongst the wild. Inhabited by a young boy in a partially knit scarf, and elderly woman in a rocking chair, and the young long-haired man whom manages the place, that brings each selective person to this odd establishment, Haruneko is a wonderful experimental feature filled to the brim with interesting characters and vivid imagery. Fans of the bizarre will find lots to enjoy here while more casual movie goers my find themselves scratching their heads from time to time. It's not to talk down on anyone though, because there were things that most certainly went beyond me, and I'm not afraid to admit it.

Right off the bat, we are transported into this hypnotic world with an entrancing score and alluring overlapped images of a spiraling forest. It immediately and confidently sets the tone in these first handful of opening shots, foreboding what is yet to come. It's a sense of unease and almost dread, but there is a playful undercurrent. Not all is gloom and doom, but most certainly the light cast in this world isn't as bright as one may wish for. Things go from somewhat normal, though off-kilter no doubt, to downright otherworldly and benign all at once. It's an odd combination, but there is a soothing feel to this dark tale as it weaves itself in an unconventional manner. We learn very little about the people who enter this woodsy café, though we are let into knowing at least what led them to this point. I never felt too attached to any of the characters that came and went, nor really the trio within this central location, but the distance kept felt intentionally done by the filmmaker. 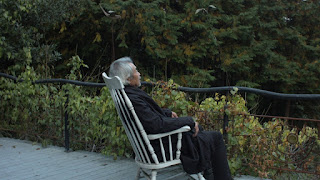 As I said before, there were most certainly things during this film that went over my head. During the scenes that showcase our long-haired host singing to a sea of onlookers, where he has a complete band and sports a white suit. . . (did I mention that his bandmates, well some, are wearing giant cat masks??), prancing about and belting out the words "Let's sing! Let's dance!". Whilst their musical show is being performed, we see that behind the stage they are located on, that there is an old man dancing in his yukata. The scenes that are recurring as such throughout left me fascinated but ultimately confused. Haruneko is one of those rare films that left me feeling equally mesmerized and stupid. It's cryptic to say the least, and has to be understood further on repeat viewings. It's almost a film that seems to be more felt then entirely understood, and in that manner it exceeds in spades.

These people that have come to the woods ready to die, are then taken further into the deep, beyond the café, where they dissolve into sound waves ultimately. It's rather depressing, but there is also a lot of beauty on display here. The mix of music and visuals make for a cathartic experience that will leave the viewer in a state of deep thought. This sense of bereavement that's put on display can be a bit overwhelming at times, especially near the end, but it's this powerful final act, though atypical in its structure, that left the movie spiraling through my mind for hours to come. It leaves you thinking very deeply, and there aren't many films nowadays that can do that quite to this degree, and for that alone the film is to be commended. 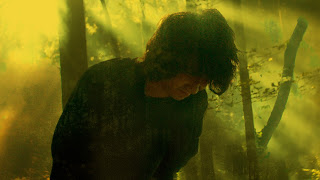 Haruneko is most certainly not for everyone. Some may find its strangeness off-putting while others will want to give this a go just based on that merit alone. There is a lot to take in and decipher here, and its layers are something that will be wonderful to explore upon repeat viewings. This artful reflection on death and the moment of passing is something to behold. The film feels personal but universal at once. While the message may be a bit cryptic at times, the emotions felt and the questions raised are something that we can all relate to in the end. Bittersweet, funny at times and haunting at others, Haruneko is a one-of-a-kind piece of cinema that must be experienced. I'm not sure who to recommend this to exactly, but for those who have stuck around to this point, I think you might be more than grateful I did.