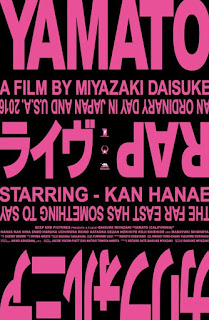 Set in the town that hold the largest U.S military base in Japan, which is owned by the States, Yamato is the place of focus for a hip-hop loving woman named Sakura, a local resident who struggles to find herself as she tries day to day to rap her way to stardom. She wishes desperately to leave her mark on the scene which she is such a huge part of, but seems to be failing to do so regularly. We see her sitting upon a pile of rubble at a large junkyard, which gives post-apocalyptic vibes as the camera pans around this particular place during the opening shot. She is spitting bars about her miserable existence, and the isolation that plagues her everyday in this place where nothing seems to make sense. Yamato explores this hybrid community filled with racial tension dealing with immigrants, the homeless, and all around a tense atmosphere that would put a strain on anyone, while examining art and its impact on human existence from the aspect of hip-hop.

Sakura spends her day fairly lazily, but with a mission, to pen her first great rap song, that will leave a mark on its listeners. Even if she just reaches one listener and it manages to stick with them and move them, then she would feel accomplished. Unfortunately she lets her surrounding get her down and question everything constantly. Passion for this music thrives within her and gives her great desire to progress as an artist, all the while being held back from something she can't quite grasp. She lives at home with her single mother and older brother, who she constantly bickers and fights with. Her mother's boyfriend, an American G.I., has a half Japanese daughter named Rei who is coming to visit and stay with the family. When she arrives, Sakura naturally gives her the cold shoulder, but determined to make friends, Rei eventually breaks through and the two form a strong bond blossoming over their shared love of the world of hip-hop. 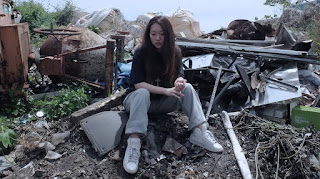 Easily one of the most commendable things about Yamato is that it never glorifies Japan and the locals of the town and in fact shows an ugly side from its residents presented in various sequences and moments throughout such as some hooligans throwing rocks at some homeless people that are passing by, a large group of anti-immigrant protesters that are marching down the road, and so on. Patriotism and pride is a wonderful thing, but it is refreshing to see both sides of the spectrum being showcased. That societal tension is something that echoes all around the world and is a grim reminder that the human race has a long way to go. It's depressing yes, but completely honest in its portrayal. Even some small remarks of race are made within Sakura's own family regarding Rei's physical appearance and her inevitable arrival. The movie isn't all dark though and the friendship built between Sakura and Rei is endearing and brings light to a fairly dark world.

It's clear that Sakura is broken and wishes to dig herself out of the hole she created. The conversations between her and her new friend and the events that unfold between the two throughout are pushing her towards that breakthrough she longs for. On a side note, the song "Do My Thing" by Norikiyo is performed on stage at one point and is an incredible rap song that needs to be heard by more music lovers. Sakura spits some fire later on, and without spoiling, it is something to behold and not quite what you think it would be, but is without a doubt one of the highlight moments of the film. Some interesting almost avant-garde like sequences occur at key point in the story, and have continued to stick with me since. The filmmaking is varied in technique throughout and brings to mind the works of plenty other great directors, but without name dropping let's just say the film stands tall on its own merits but has some obvious influence at times. 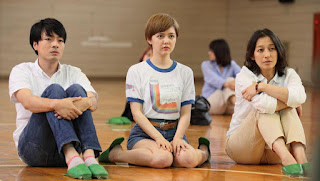 There is a lot to unpack and touch on here, and I can't even begin to say that I scratched the surface. It's a film with large thoughts put into its every message it delivers on the very social issues it portrays, raising many questions. It's the perfect mixture of arthouse and more conventional drama storytelling. A wonderful character study with the emotions felt being raw and true to life and brings the viewer through many ups and downs. It is heart-warming, heartbreaking, and at times frustrating, pertaining to its social issues, Yamato is a film that I walked into not expecting much from and walked away from completely surprised by. It sticks with the viewer and showcases a powerhouse performance by Hanae Kan as Sakura, and fuses its world with the power of rap and hip-hop. One of the biggest surprises of Japan Cuts 2017!