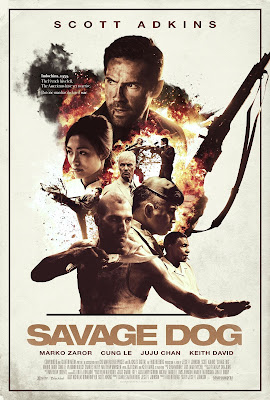 Some legends are born and others are made. For a film like Savage Dog, the idea of crafting a legend is central to its story and one that finds itself repeated throughout Keith David’s shockingly effective voice over narrative. It also seems to be the intent of its cast and crew in the bigger spectrum of making an action film that stands out from the rest. For B-action movie connoisseurs, Savage Dog has already developed hype and status. Jesse V. Johnson has accumulated a stunning modern action cast and gives the film a unique period piece setting to let them loose. On those three things (director, cast, and concept) the film already seems poised to be one of the cult classics of the year and perhaps one of its sleeper hits. While the ambitions of Savage Dog occasionally outpace its own boundaries which may not lift the film into the upper echelons of action filmmaking in a specific regard, the film partners those ambitions with a lot of memorable and fascinating approaches that make it one of the more interesting films one is likely to see this year, simply in its blending of genres and intent. It’s a film about legends and for fans it just may reach the next step towards becoming one with its action set pieces, screen devouring cast, and great concept.

Martin (Adkins) has been held in a small prison cell for years. It’s 1959 in Indochina and he’s not itching to get out. He’s a wanted IRA man and his routine of being forced to fight challengers by his captors, an ex-Nazi (Kulich) and his Spanish henchmen (Zaror), gives him purpose. When he’s unexpectedly let go, a relationship with a local girl (Chan) and her father (David) gives his life new meaning, but for a man meant to be a killer how long can that last?

When Savage Dog first started, it took me by surprise. Narration by Keith David started (already a great choice) and the film took on a kind of noir-inspired tone that was shocking. This kind of approach, perhaps a tad unusual for an action film of this level, already seemed inspired. Partnered with its period setting, this seemed to indicate that this was not going to be the usual approach for what my expectations had in store for me. The film, from that point at least, does embrace a more simplistic manner for telling its story. It’s about a man pushed to his limits by a terrible situation, who wants to change his life and is forced back and forth between being a good person and the terrible killer he was forced to become. This isn’t groundbreaking in any way, but often enough in action films like this the 'less is more' approach works best. It’s during the second act, when Savage Dog tries to run with its romantic plot that it tends to stumble a bit, forcing a lot of uneven emotional switches for characters and transitioning from a prison fight flick into a more traditional revenge story, that it struggles the most. Unfortunately, due to its rather brisk run time, it’s during this second act that it needs to spend a lot more time developing key plot progressions and character beats that it just doesn’t have time to accomplish. It’s carried by some fantastic performances from Keith David and Scott Adkins, not to mention the plethora of scene stealing villains, but it’s a bit rough around the edges – and features one of the more shocking and out of place twists I’ve seen in a film this year.

However, don’t let that deter you, dear action fans, because what Savage Dog does well is the massive sprint that it pulls off in the entirety of the third act. While the first act sets up things nicely, establishing some vicious villains and an anti-hero of Scott Adkins' IRA trained prisoner trying to break his chains all to the back drop of a noir-inspired narrative device, it’s the third act that truly ignites things in explosive ways. Massive gun fights, explosions, and Scott Adkins going full violence takes the film to a new level. Jesse V. Johnson handles the pacing and visuals of this act like a pro, showing us what we need to see without catering to modern stylistic points that pull away from showcasing the talents of its cast and concept with remarkable ease. By the time we get to the brutal fist fight between Adkins and the often overlooked talents of Cung Le this film is flying. Then, after a bit of a breather, Savage Dog goes full space flight with the rematch action fans of been waiting for as Adkins takes on the enigmatic Zaror (who steals damn near every scene in the film) and the ensuing battle does not disappoint. Savage Dog is savagely entertaining.

All in all, despite some flaws in the second act and the occasional hiccup in plot structure, Savage Dog fulfills the lofty expectations that are placed on its shoulders. It’s unique in its setting and clever with its use of noir elements, but it keeps things simple in the first and third acts to deliver charismatic characters, efficient narrative delivery, and robust action set pieces to have any genre fan drooling at the sheer velocity of its execution. Director and writer Johnson handles the material in a lot of ambitious ways and even when those outpace the actual quality of the film, they make up for most of it in the great things he does accomplish. Still, it’s a film mostly for action connoisseurs and those outside of that realm may not buy into it as easily. For a film that speaks about legends as much as Savage Dog does, it sure does feel as though this is a film on that path to make it there.

Written By Matt Reifschneider
Posted by DarkReif at 7:02 AM