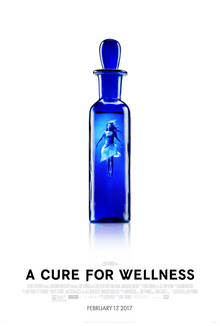 Upon hearing so many mixed opinions on A Cure for Wellness from trusted friends and critics, it was hard not to be skeptical of Gore Verbinski’s somewhat hefty return to the horror genre. It looked slick from trailers, but there was certainly a distance that it seemed to create in its viewers that didn’t spell great things. However, now that I’ve taken time to sit down with the film, I’m shocked there isn’t more love for it. It’s easy to see why more mainstream movie people would dislike A Cure for Wellness based on its somewhat abrasive approach, mixture of intent, and extensive run time, but it’s a film that uses its meticulously assured hand in crafting a cinematic experience that’s both modern and completely rooted in a decades old style that makes it both fascinating and strangely effective. A Cure for Wellness is the throwback modern horror film that the mainstream horror genre desperately needed and no one understood on its release. It’s a film guaranteed to develop a devout and voracious cult following in the years to come.

Lockhart (DeHaan) is caught in a hard place. He’s a very bright and brilliant up and coming businessman in a massive corporate office, but the board needs him to do an odd favor or they plan on throwing him under the bus. He has to go to a strange rehabilitation center in Switzerland to retrieve a missing board member. It seems easy enough, but when Lockhart gets there he finds that nothing is what it seems and the pleasant nature and vague focus of “a cure” makes him uneasy initially…only to see that things may be more horrific than expected.

Gore Verbinksi has shown himself to be a filmmaker that isn’t afraid to take chances. He directed three of the largest films ever to be released in the first three Pirates of the Caribbean films, one of the strangest (also, best) animated films of recent times with Rango, one of biggest bombs of all time in The Lone Ranger, and was one of the few people to somehow figure out how to translate a J-Horror remake for western audiences with his remake of The Ring. It’s this last film of his relatively diverse resume that is, obviously, the one that is most connected to the style of his latest horror epic and it’s a good way to think about when one goes into this. That’s because, like his dreary and atmospheric spin on the J-Horror classic, A Cure for Wellness is all about the tone and atmosphere. As was perhaps obvious from trailers, this film tends to use its visuals, including symmetric and asymmetrical set design and effective nightmare sequencces, to craft its rich tones and suffocating atmosphere. Verbinski spends a lot of money in crafting some fantastic sets to help craft a kind of fantastical and old school gothic feel to the film and it adds infinitely to the entire experience of the film. Along with its vague and often drawn out script, A Cure of Wellness is all about this cold and isolating experience which was completely engaging for me, even if it isn’t for most people.

Now, one of the things mentioned above as a key part of the atmospheric build of the film is the gothic tones and lavish sets used in it. This is an anchor for the most surprising aspect of A Cure for Wellness which is its throwback approach to crafting a modern and layered horror film. Throughout its entire runtime, the film has a distinctive 60s and early 70s Italian genre vibe. The sets and gothic tones are distinctly Mario Bava and the more outlandish aspects of the film, including the repeated use of eels or most of the entire third act as many of the twists of its plot and narrative are unveiled, certainly indicates a Dario Argento or Lucio Fulci experience. As the film goes and the plot and experience gets increasingly nightmarish and more fantastical, it’s easy to see why some viewers (particularly mainstream ones) would be offset by the Italian foundations of the script and style, but for this reviewer it was only a fanciful surprise that added to the core of what this film exceeds at.

In the end, while I whole-heartedly enjoyed and was enthralled with my viewing experience of A Cure for Wellness, it’s easy to see why it was a box office bomb in the US. It’s a challenging film that uses its lengthy run time and subtle build for maximum atmosphere versus pure entertainment, and yet does not hesitate to embrace its Italian genre throwback elements to craft an aggressive and abrasive third act that spins the entire thing on its head. The execution is what carries it though as it features some stupendous performances from its cast, an enigmatic score, and a truly unique visual palette that’s half Mario Bava and half Proya’s Dark City. It’s not a film for everyone and may not even be for most horror fans looking for cheap scares, but it’s an experience that needed to happen to challenge the main Hollywood horror status quo. It comes with a very high recommendation for those interested.