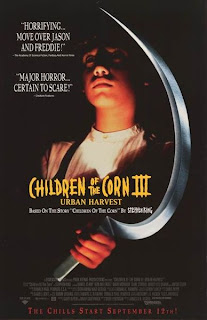 After suffering through "Children of the Corn II: The Final Sacrifice" I predictably wasn't too enthusiastic going into this third entry into the overlong franchise. Is it bad? Sure it is and that should be expected but unlike the second film this sequel embraces it's tackiness (to an extent) and still manages to have some fun by going more over-the-top with its overly silly subject matter... and in turn at the same time burying Stephen King's original premises under more piles of corn-filled shit.

Like the subtitle promises this time the plot comes to the city as two boys, who were members of the children cult from the bible belt who worshiped "He Who Walks Behind the Rows", get adopted by a wealthy inner city couple. The youngest brother Eli starts worrying his new parents when all he does is preach and secretly plant a corn patch in an abandoned factory behind their yard. Soon Eli is causing all sorts of supernatural chaos and killing anyone who uncovers secrets of his past and his future plans. Soon he is converting all the children at his local school to his "religion" and it's up to his stepbrother to stop him before he takes the neighborhood straight to hell.

Director James D. R. Hickox makes his film debut here and he takes lessons from his brother Anthony Hickox (director of the "Waxwork" films, "Warlock II" and "Hellraiser III") by taking a light tongue-in-cheek approach to the subject. I mean really could anyone really take a film seriously that climaxes with a demonic beast with roots in the soil that tears victims apart and even eats children via silly miniature effects? I think not so he keeps his tongue in his cheek and gives the audience some silly effects and over-the-top gore moments (one that even includes a student getting his spinal cord ripped out only it happens to be 12 feet long!).

Though he takes a less-than-serious approach to the subject matter the plot still has too many moments that tend to piss me off. Here the film actually has the corn itself being a special type that grows at an accelerated rate and anywhere it's planted it brings an evil slimy monster in the ground. Eli even has plans to convince his stepfather to ship the corn around the world to spread the evil. Really? I thought having mold that drove children mad in the second film was a stretch but this is ridiculous!

Even with its slight tongue-in-cheek approach the film still comes out too damn silly and downright stupid to be highly entertaining horror. It's definitely better than part 2 but I can't go so far as to recommend this sequel other than to the most hardcore and forgiving "Children of the Corn" fans. Did you love it? Well don't worry there are four more sequels to go! (to the date of this review that is) 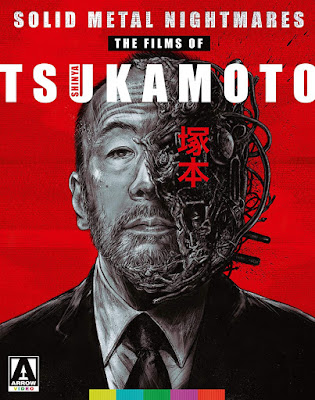