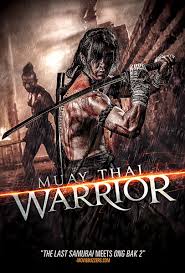 The cover of "Muay Thai Warrior" claims the film to be a cross between "The Last Samurai" and "Ong Bak 2." Now, call me a sucker, but when you start talking about thoughtful historically set clash of worlds and relentless Thai ass kicking then you have my attention, people. Granted, I think that statement is perhaps a little forgiving of the film's many flaws, but it gets the jist of the film down. "Muay Thai Warrior" is, at times, quite a thoughtful and artistic look at the clashes of culture (in this case between Asian countries) and it certainly showcases some beat downs courtesy of the knees and elbows of Muay Thai trained warriors, but...and this is a rather big but...it lacks a lot of the execution needed to truly blend the two into the tour de force that the cover art statement would indicate.

Yamada Nagamasa (Seigi Ozeki) has been left for dead by his samurai brothers in a vicious turn of events. To his luck, he is rescued by a small village in Siam and nursed back to health. Despite his foreigner status, he finds himself at home in the small peaceful village and strives to become a member of the community. To do so, he begins training with some of the warriors in their native martial art Muay Thai boxing to become a bodyguard to King Naresuan.

There is plenty of little things to love about "Muay Thai Warrior." The settings are lush and vivid with beautiful landscapes to set the scenes to and the acting from our handful of leads (with a particular nod to the lead Thai warrior who befriends Yamada, who seems quite able to throw down some fun intensity) seems to fit the style of the film with relative ease. The fighting focuses on the true techniques and combat of Muay Thai, unlike the more stunt focused work of the Ong Bak films, and it really shows just how cool the martial arts style can be. Director Nopporn Wartin also keeps the pacing nice and brisk for the film rarely letting its "historical context" slow it down too much which is a nice change of pace...pun intended.

Yet, these are all little things and too often "Muay Thai Warrior" falters to the bigger elements in making this film a success. One of them being the rather predictable turns that the film takes. I do not know the true historical context that the film lies in so I cannot judge it on its accuracy, but the film seems to follow a well treaded path with many of its plot progressions. Slightly under-built romantic subplot? Check. Rivals that become friends through mutual respect and hard work? Check. Eventual full circle appearance of baddies that lead to the events in epic showdown between leader and soldier? Check. You've seen this kind of film before and honestly, "Muay Thai Warrior" doesn't add enough depth to make it seem fresh enough to sell it. It's easy to digest, yes, but rarely trusts it's audience to take those daring leaps dramatic fair and brutal fighting it wants to go to but never fully embraces.

This is, of course, a foundational flaw that undermines many of the better aspects (the fight choreography, some great unexpected acting chops) and then director Wartin seems to want to add too much style into many elements that seems out of place. The score of the film can be overwhelming at times (and perfectly fitting at others) and the weird fight style choices can deter some of the great choreography. The odd speed up/slow motion tends to get tired after a while and the CGI gore is achingly obvious. I'll give it to "Muay Thai Warrior" that the fight sequences are the best part, but they might have been even better had Wartin stuck with a more realistic and straightforward style rather than the visual flair added later.

"Muay Thai Warrior" is a film that definitely has its moments of artistic thought with its lead character, strong combat work, and lush colorful visuals. It's also quite predictable, inconsistent in execution, and slathered in pointless style. It's a film that I desperately wanted to love, but felt strained to do so. It's a great story and any fan of Muay Thai combat will have to see it for the stunning choreography, but beyond that its going to be more of a martial arts genre fair than one that rises above that.

If you are a fan of Thai film making or just want to see a plethora of pissed off Muay Thai fighters duke it out, then I highly suggest picking up "Muay Thai Warrior" for its March 5th, 2013 release from our dear friends at Well Go USA. Click the links below to do that, right now!