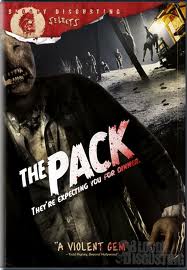 French horror films have seen a massive resurgence as the likes of "High Tension", "Martyrs", and "Inside" dominated the extremity of the genre. When I finally was able to get around to seeing "The Pack", a shape shifting genre flick that was likened to the films mentioned above, I was excited to see what else the French horror landscape had to offer. The end results of "The Pack" though are a rather mixed affair that borderlines significantly disappointing. Sure it has some moments to love and the concept is delightfully twisted, but the overall product ends up falling quite short of the high standards set by its brethren.

When Charlotte (Dequenne) picks up a strange hitchhiker Max (Biolay) on the side of the road, she seems to have no fear of anything. Together they road trip for a while before eventually coming to a little restaurant off the beaten path run by an odd elderly woman (Moreau). It is here that Max mysteriously disappears. Charlotte later returns to 'investigate' what happened to Max only to find that the restaurant is meant to feed more than hungry customers...

I will admit, the first third of the film was a winding and often quite engaging film. At one point the film feels like a slasher film only curve itself into a mystery before finally carting down towards a 'cannibalistic' family route. "The Pack"'s gene bending abilities in this artful and atmospheric first portion made for a rather unique and impressive start, leading me to believe that it just might end up clawing its way up the ranks of French horror. The acting here is subtle, but fitting while Emilie Dequenne made for an intriguing protagonist to take this trip with. As the film begins to truly show its horror tendencies above its mysterious opening, that's when it also begins to crumble right before your eyes.

The concept of the film is definitely a highlight as the final half begins to show its true colors. What started off as a mysterious slasher and torture-esque film, "The Pack" begins to unfold as an off beat zombie art house picture. Hints of a more mysterious almost witchcraft like subtext is there to tease you and most of the tension remains throughout the rest of the play time. Unfortunately, as the film digresses into more nightmarish moments that focus on these very creatively designed "undead" creatures who are awakened by blood in the soil, the film's focus goes with it. Not much from the opening comes back around to come full circle (leaving me quite frustrated as there was so much potential there) and the ending ends up leaving us with far too many questions for its own good.

Director/writer Franck Richard seems to have this brilliant idea planned out, but some of the leaps of logic and forced artistic merit that are pulled at the end seem to undermine the general quality of the film. The special effects are quite impressive (the "undead" are vicious looking and make for some frightful villains), but the film feels the need to do some odd things that make us question just what the film is trying to do - including some daft ideas like having the "undead" seemingly teleport from place to place and never explaining just they want with our helpless protagonist. By the time the credits rolled, I was insanely frustrated by the lacking focus and uneven atmosphere.

What started off as a very unique and potentially impactful horror film quickly turns to skeptical leaps of plot hole riddled thought and unfocused/undeveloped concepts unveiling "The Pack" as one of the weaker horror films to jump over to the US from France. It is a film that definitely has it's moments, but for those with a bit more of a developed horror taste or looking for another strong French horror film...then I suggest looking elsewhere.

Yet, if you are a collector of French horror or as simply intrigued by the film's blending of genres, then feel free to click on the link below to pick up your copy right now.