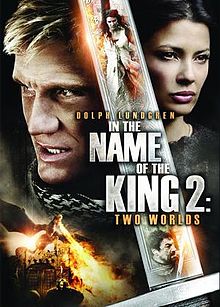 Since I just reviewed the first "In The Name Of The King" for my Statham marathon and I stumbled upon "In The Name Of The King 2" on Netflix streaming (which means I didn't specifically pay for this movie), I felt inclined to discuss this uncalled for sequel to Uwe Boll's fantasy action "epic" with you. Whereas the first film was a silly cluster of poor undeveloped ideas that was unintentionally fun, "Two Worlds" is a silly cluster of poor underdeveloped ideas that was just...awkward. Uwe Boll fails to really improve anything with this sequel, despite taking it in a slightly more darker direction, and the film fails to even provide the unintentional laughs to at least give the viewer a little bit of entertainment through its SyFy Channel look and feel.

Granger (Lundgren) has been living a solitary life of deep regrets. As a former Special Forces operative, he feels the loss of his fellow soldiers weighing down on him and seemingly drifts through life. When a mystic portal to an ancient medieval time (maybe universe?) opens and he is whisked away, Granger finds himself aiding a King (Munro) to rid his world of a plague ridden evil clan who plan on taking their plague into Granger's time. Will Granger be able to shake off his shakes, strap on a sword, and kick some ass?

As an action film buff, it's hard not to feel some excitement at the fact that Dolph Lundgren is in this film. Unfortunately, he is completely awkward in the role and seemingly has no intent in doing even a half ass job here. The acting is horrendous and Lundgren might be the biggest culprit, but even his supporting cast seems to be on autopilot and it makes the ridiculous story (a time traveling warrior in an unknown place? How cliche...) seem even less intriguing than normal. The writing certainly doesn't help either as most of the dialogue comes off as forced or silly and the plot progressions seem content in not building any kind of suspense or fun atmosphere. They throw in some random connections to the first film, like claiming that Lundgren is the true king as he is the long lost son of Farmer (Jason Statham's character from the first film), and they try to create this mystery intrigue by throwing around this idea that the good guys are actually the bad guys and vice versa. Nothing seems genuine in its intent though and the lack of connection to our hero (or anyone for that matter) makes the film drag on as our investment into the story is limited.

That's alright though! We watch these kinds of movies for action! Even "In The Name Of The King" had random bits of kung fu and ridiculous battle sequences to entertain! Too bad "In The Name Of The King 2" doesn't even have that going for it. Despite its attempts to inject a few action sequences here and there, the low budget and half assed attempts by Lundgren seem to undermine anything that would have worked. If it wasn't for the occasionally humorous one liner delivered, most of the action has no pay off as either cool or relevant here. Even the silly CGI dragon is often head-scratchingly used in the final act and the hand to hand combat seems too quick and poorly choreographed to be pulse pounding in any way.

Boll normally entertains despite some horrible choices as a director, but too often "Two Worlds" comes off as too serious and the execution within the confines of its budget are shaky at best. Lundgren seems more interested in the pay check than the character or story and the action is unmemorable and often poorly staged only for the film to end in one of the most awkward ways possible that feels completely unresolved. It's hard for me to say this, but dammit - this film is worse than it's predecessor. That says something.

BLOODY TRIVIA: A quote from Dolph in Empire magazine: "It was an experience, it wasn't exactly my taste, but I did it for other reasons. I was getting divorced at the time and I needed some cash quickly to pay for a few things... lawyers."