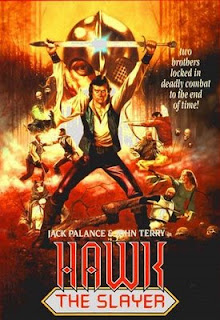 
I originally bought the USA Home Video big box release of “Hawk the Slayer" over a decade ago for $.99 at a mom and pop video store but the problem was the tape was so decayed due to age that I couldn’t even watch the film, and I desperately wanted to watch it because the cover artwork was so bad ass. Now all these years later and finally having a viewable DVD it was amazing the glorious fantasy trash I missed in my childhood. You see long before the days of Peter Jackson’s “Lord of the Rings”, fans of fantasy entertainment had little to choose from with “Hawk the Slayer” being one of the ‘best’. Boy it must have been rough times for fantasy fans! 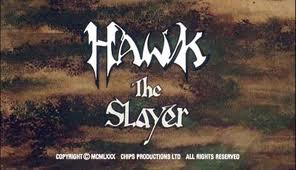 Hawk the Slayer is obviously the hero of the story and he’s on a mission of revenge against his brother Voltan (Jack Palance). Voltan, jealous of his brother for stealing his woman, kills his little bros fiancee and then proceeds to kill their father but not before getting his eye burned out of his socket. Hawk, with the power of magical sword (imagine that in a fantasy film) gathers a group of mercenaries (a giant, a dwarf, an elf, a witch and a peasant) to stop Volton’s iron grip on the land and to protect a coven on nuns for good measure.

This low budget British flick shows its lack of funds on its face with laughable effects, costume designs and sets. The special effects are regulated to glowing hula hoops, glowing rubber bouncy balls and the best yet is magic silly string that has the ability to freeze enemies in their place. The acting is equally as bad by being on total opposite ends of the spectrum. John Terry as our hero is absolutely lifeless as a stone statue but Jack Palance over compensates this by overacting, hamming it up beyond belief plummeting whatever respectable elements the film had going for it into complete camp. Also Palance looks way too damn old to be Hawks brother… by about 30 years! Hell Voltar’s son Drogo even looks older than Hawk.

Some compare “Hawk the Slayer” to “Star Wars” with our hero having some special ‘force’, a magical sword, two side characters acting like R2-D2 and C-3PO, and the villains helmet looking like Darth Vaders. This is giving “Hawk the Slayer” too much credit but even with the film having such deplorable dialogue, laughable effects and lack-of/overacting of its cast one can tell it was made with love and affection for the subject matter even if the result of the film is lower tier fantasy trash. The cheesy early 80s synth score mixed with flutes is just sugar coating for this entertaining flick that will appeal to connoisseurs of cornball cinema that could only be found in the ‘big boxes’ of glory day video stores.