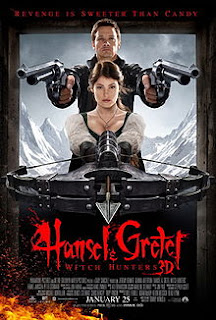 When a film gets mostly negative reviews, it tends to make me cautious. This was how my initial feelings about "Hansel & Gretel: Witch Hunters" played out. Then it was pointed out to me that this goofy R-rated action horror was directed by the guy that gave us "Dead Snow." Within 24 hours I was in the theater, ready to enjoy. I'm certainly glad I did. Despite what the initial reports said, "Witch Hunters" was a complete and utter blast for me. It was a film that reveled in its ridiculousness, forcing the tongue into cheek humor, and completely running with its B-grade concept to the full extent of its own awfulness. The film might not have been good by any stretch, but the film knew it wasn't and ran with it anyway - an element that the cult film fan in my loves to see.

After the horrible events that lead the brother/sister duo of Hansel (Renner) and Gretel (Arterton) to becoming orphans and killing a witch, the two realized that it was their calling to continue the swath of destruction. Thusly, the two train to hunt witches for hire. When a handful of children go missing from the same township the witch hunters are hired to investigate and save the children. An evil witch (Janssen) has started a collection to fulfill an evil prophecy to make her and her fellow witches immortal...so now its up to the brother and sister hunting team to make sure that it doesn't happen.

Man, this film garnered a lot of hate. Critics lambasted the film for its weak plot, over the top violence, and thin characters that predictably moved about the fantasy setting. Ironically, I cannot argue with those points. "Witch Hunters" does have a weak plot, over the top violence and thin characters. The difference I think is that I may have been one of the few to realize that I was going to a film called "Hansel & Gretel: Witch Hunters" and not "Lincoln." If you are going to a film called that, then I suggest you take off your hoity toity pants and slip into something a little more comfortable because this is a the kind of film that you sit back and enjoy for its outrageousness.

If you so happen to do what I suggest, then you will find "Witch Hunters" to be a violent and silly film that entertains in all the right spots. One thing that did surprise me though was the lacking "horror" to be found in the film. "Witch Hunters" is easily much more of an action comedy than any horror to be found. Yes, there are some great gory special effects (and I very much appreciate the lack of CGI for much of the stunt work) and the witches are definitely creepy in their own cartoonish ways, with a particular nod to a rather seething fun performance from Janssen, but this film was made for the B-grade action fan in me more than the horror fan. The action is insanely fun, albeit a bit repetitive by the end, but there is something innately pleasing to see witches get clothes-lined off of broomsticks or have Renner boot one in the air to blast it with a shotgun. Even the silly run of the mill dialogue seems to be more catered to the action audience. There are even some great one liners to be had here including my personal favorite: "Whatever you do, don't eat the fuckin' candy."

If you want more horror in your diet, I suggest perhaps something else, but for this B-grade action fiend "Witch Hunters" hit all the right notes. It doesn't stray from the path at all in its formulaic writing and often enough it didn't seem to be willing to even push the boundaries past the obvious surface level shenanigans that ensue, but it felt as if everyone involved with this spectacle of violence and tongue-in-cheek absurdity was having a blast. Director Wirkola is obviously inspired by the likes of early Sam Raimi ("Evil Dead 2") and Peter Jackson ("Dead Alive") and he slathers the film in that same style and flair. Thusly, I felt like having fun too like the rest of them. "Hansel & Gretel: Witch Hunters" is only for those willing to sit back and have fun. Turn your brain down and just go with it.

Written By Matt Reifschneider
Posted by DarkReif at 4:39 PM