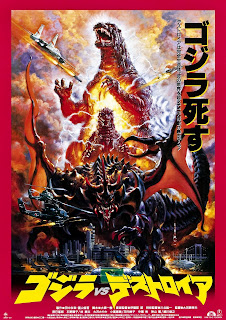 
Toho was not shy by announcing they were going to kill off Godzilla in this twenty-second entry into the franchise. They had just recently licensed their legendary character to Tri-Star pictures for an American remake and they thought it necessary to kill him off to make way for a possible U.S. version of the series (this plus the series wouldn’t degenerate to shear stupidity by going on too long much like the original run of the franchise). Due to this Toho went all out making this final entry (for the time being) one of the most entertaining of the bunch, especially with the new ‘meltdown’ look of Big G and introducing one of his nastiest villains yet. 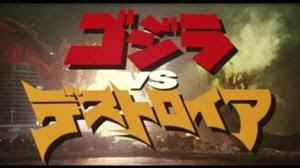 Godzilla appears to be having a serious problem. Apparently his heart is like a nuclear reactor and it's starting to meltdown. If this fallout occurs it could destroy the world. While frantically trying to figure out a solution, authorities are faced with a new problem when small crustaceans in the sand affected by the oxygen disintegrator that killed the original Godzilla in 1954 begin to mutate, eventually merging together into a hellish creature called Destoroyah. Can the japs help destroy this demonic looking beast while at the same time saving the world from Godzilla’s nuclear meltdown? 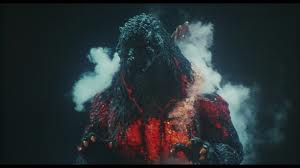 The look of Godzilla is absolutely astounding and I can’t imagine how difficult it was to create this “meltdown” version of the suit. Portions of the suit glow orange as well as constant smoke pouring out of its pours. It had to be insanely uncomfortable for the stuntman but the on-screen results are mesmerizing. The new Destoroyah creatures are also hellish looking and the sequences where our creatures attacking authorities resembles more of a horror film. The final merged version of the creature even looks like the fucking devil! To top it off Godzilla’s son, in adolescent form, is actually starting to look like his pop… and about fucking time! 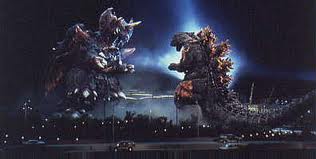 “Godzilla vs. Destoroyah” was a fitting end to the “Heisei Era” of the franchise and it rounded things out beautifully by tying so much of the plot into the original 1954 “Godzilla” film. The new villainous monster was straight out of the mind of H.P. Lovecraft and the meltdown version of Godzilla was a blast to look at. It almost brings a tear to one’s eye to see our big guy finally die but fans knew this wouldn’t be the last they’d see of him. They all knew the American remake would fuck things up (and it did) so the true Godzilla would make its rightful return on the Japanese big screen, where he belongs.