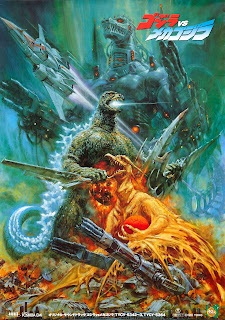 Aka "Godzilla vs. Mechagodzilla"


Despite not getting theatrical or even video releases in the U.S. (until many years later) Toho was on a role making a Godzilla movie ever year in the early 90s by successfully “remaking” sequels from the original run of the franchise. This “remaking” was running into problems with titles as many of these sequels in the “Heisei Era" of the franchise had similar or even the same titles of the films that came over a decade before. This explains the odd title “Godzilla vs. Mechagodzilla II” as at first glance this title makes it look like a direct follow-up to the 1974 film “Godzilla vs. Mechagodzilla”… which it is obviously not. It was released in Japan as simply “Godzilla vs. Mechagodzilla” but American audiences would no doubt get it confused with the original film so it was re-christened “Godzilla vs. Mechagodzilla II” to differentiate it but this new title even brings on problems of its own. It’s confusing, I know, but don’t let this titling mess detour one from seeing this entertaining entry into the franchise (the twentieth overall) as Toho reinvents one of Godzilla’s most badass villains. 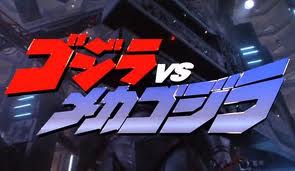 Recovering the remains of cyber-Ghidorah from the ending of “Godzilla vs. King Ghidorah”, scientists use the futuristic technology and weaponry to build Mechagodzilla, mankind’s main defense against the horrors of Godzilla. A subplot of the story has a team discover an egg on a tropical island (also home of Rodan) that hatches to bring forth Godzilla’s son (I know what your thinking but trust me it’s not like Minilla in “Son of Godzilla”). Discovering that Godzilla’s son has a second brain in its lower back (I shit you not), the military team devise a plan to rid Godzilla for good by striking him in his Achilles heel. 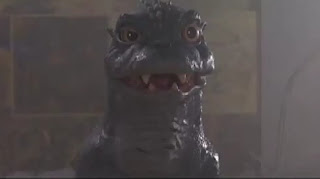 The interesting switch-up Toho did with this sequel is the role reversal of Godzilla and Mechagodzilla as this time MG is the good guy! The problem is since he’s the good guy this time around the look of him is far less menacing than his 70s counterpart. Godzilla’s son, on the other hand, is a BIG improvement over the Pillsbury dough boy look of Minilla in the original series. This time he actually looks like a reptile! Rodan also gets a nice update and it’s great to see a classic monster like him re-introduced into the franchise. 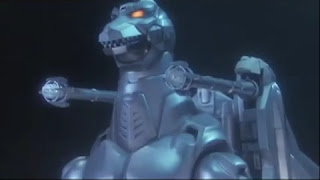 “Godzilla vs. Mechagodzilla II” is strong entry into the franchise with Toho being on a role of good sequels (which would soon come to and end). Re-introducing Mechagodzilla was a welcome surprise and the twist of having it be the ‘good guy’ was brilliant. Sure the sequel has some science fiction mumbo jumbo, like the eyes of Godzilla’s son glowing red whenever he is scared, but what Godzilla film doesn’t – it’s become part of the loveable formula! This should rank high on lists for Godzilla fanatics.

Written By Eric Reifschneider﻿
Posted by Cronosmantas at 8:27 AM