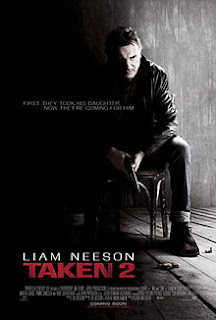 Luc Besson may be the king of ridiculous action films filled with shiny charm and silly characters, but "Taken" took it to the next level. It was smart, intense, and all of the normally illogical elements seemed to actually work together to create a whole action film that rose above its parts. "Taken 2" is essentially none of that. Luckily, I knew going into it that it was directed by Olivier "Shake, Edit, And Roll" Megaton, who has proven previously with "Transporter 3" and "Columbiana" that he can't direct an action sequence to save his life, and thusly I lowered my expectations. It didn't help that much. "Taken 2" is still a seriously inferior entry into the series where the thrills are often rushed, illogical, and barely watchable.

Bryan Mills (Neeson) has re-established a connection with his daughter (Grace) and his ex-wife (Janssen), when she starts to go through a very rough patch with her current husband. As an ex-CIA operative of the highest caliber, he takes up jobs of security where he can and he offers to meet them in Turkey after one of his jobs to take a holiday from real life. Too bad the father (Serbedzija) of one of the men he killed in pursuit of his kidnapped daughter has it out to make him pay...

You know what, I actually kind of like the idea behind "Taken 2." I appreciate the fact that it sincerely relies on the audience to know and understand what occurred in the first film and there are some fun moments in its plot progressions that certainly tickled the franchise whore in me. The problem, generally speaking here, is the execution...which ranges from complete lack of coherency (using grenades to locate by sound?) to abysmal missed opportunities to take it to that next level. Story wise, beyond its concept, "Taken 2" is horridly rushed as it simply brushes over much of the family dynamics to get us to the action. Not that I have anything against the first act feeling like a Lifetime movie...oh, dammit, yes I do. I really do have a problem with its really cheesy dialogue about driving lessons, torn marriages, and new boyfriends who are drastically underdeveloped. The foundations of the film might be just as cliche as the first "Taken", but dammit they just don't have the solid acting and direction to make them work. Without a foundation, what can Megaton build on?

Which brings me to Olivier "Shake, Edit, And Roll" Megaton. I seriously don't understand why Besson continues to use him. The guy fucked up "Transporter 3" and took a rather charming Statham and made him seem cartoonish. He does the same thing here with Neeson. I'm not one to complain when Neeson shrugs off the ridiculousness of his luck and decides to kick ass. In fact, I'm all about that. Yet, in "Taken 2", I was relatively bored with the entire thing. Even the surly voice and general awesomeness of Neeson couldn't save this film from mediocrity as he (and the entire rest of the cast) seemingly phoned in their performances and seemed as uninterested in the story as I was.

Then to ice the cake, Megaton decides to go all Greengrass on the direction of the action sequences. Quick edits, wicked fast zooms and close ups, and shaky cams ruin any kind of flow these action sequences can gather and, despite the sheer amount of action the film has, you never really see any of it. The car chases, the hand to hand combat (with a sequence of baton battling that could have been awesome), and the gun fights all rush by in a flurry of jagged edits and poorly crafted pacing. To be honest, both of the substantially underused villains of the film (how could you really not use Boris The Sneaky Fuckin' Russian to his full potential as a villain?) seem to fall to Neeson in ways that I couldn't understand. I'm pretty sure that Neeson face palms someone to death. I'm not sure how he died. He just palms his face and BAM! Dead! Maybe it's because I haven't watched the unrated version yet. Nonetheless, Megaton has no ability to create tension to make the action worth the time and the end result is rather...boring.

Even with lowered expectations it was hard not to be consumed with disappointment in how far "Taken 2" fell from the original. It was horribly directed with half assed performances and the action was barely watchable despite some great ideas. There was potential in the film with its idea and a great casting for the villain, but here I am ragging on it for not reaching any of it. As a franchise whore, I sincerely hope that Besson takes it to "Taken 3" and fixes his mistakes. Or better yet...make a "Transporter" and "Taken" crossover film where they have to team up and drive around kicking everyone's ass...starting with Megaton.