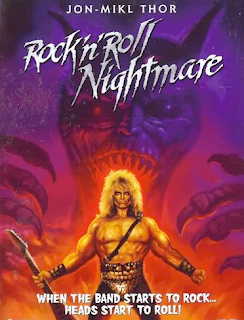 Aka "The Edge of Hell"


The Satanism scare of the 70s spilled over into the 80s when a relatively new rock music subgenre known as ‘heavy metal’ started to become insanely popular with the main stream crowds with its dark lyrics and imagery. It wouldn’t be long before this hysteria of fear from parents scared their children were going to become cloven hooved worshippers of Beelzebub would inspire a number horror-themed movies. Being a huge heavy metal fan myself, as well as horror movies, it would only be natural for me to take interest in the short-lived heavy metal horror craze. Of the films in the interesting little subgenre “Rock ‘n’ Roll Nightmare” was one that was recommended to me all time, even above the genre pioneer “Trick or Treat” film. After viewing “Rock ‘n’ Roll Nightmare” all I can say is that if this is one of the best films the subgenre has to offer then I’m in really trouble. 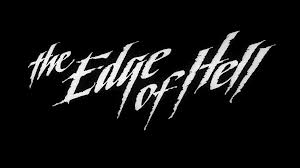 The non-existent plot reminds me a lot of “Monster Dog” with Alice Cooper… and any connection to “Monster Dog” is NOT good. We have a heavy metal band called Tritonz that travels to a reclusive farmhouse to record their new album that just happens to be a gateway to hell, or something like that, and soon the band members begin to die off. 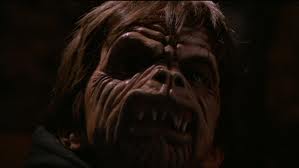 The film literally has NO script. It’s as if director John Fasano and star / Canadian metal singer Jon-Mikl Thor had a little too much pep in their step and decided to make a movie with only a loose script outline on a cocktail napkin. Due to there being relatively NO script the film is full of filler, such as long van drives cutting to an ominous farm house every few minutes, extended shots of the sky, extended scenes of our band playing below average metal music and long, drawn out boring sex scenes every ten minutes. All this dreadfully boring filler is tied to together with a sloppy narrative.

The ‘acting’ is also irrhensible but I can’t blame the cast as they relatively no script to work from. The ‘special effects’ also leave a lot to be desired and bring to mind works from the Jim Hensen factory and the little one-eyed demons totally remind me of something living on Sesame Street. The film finally comes alive in the last 20 minutes with a plot twist that will sure to make any movie fan hit the floor laughing, too bad it was such a chore to get to that point. 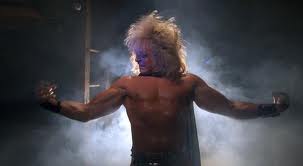 “Rock ‘n’ Roll Nightmare” is nothing but an hour and a half excuse for Jon-Mikl Thor to make an extended music video for his metal band Thor. The script, acting and directing is all non-existent. Sure the ending is bad movie classic material but it’s such a damn shame it was so dreadfully boring getting to that point. “Trick or Treat” was a much more entertaining example of the small heavy metal horror genre (not to mention far more professionally made) but director John Frason wasn’t done dabbling in heavy metal horror by helming “Black Roses” the following year, which only slightly bettered the results.

Written By Eric Reifschneider﻿
Posted by Cronosmantas at 2:48 PM