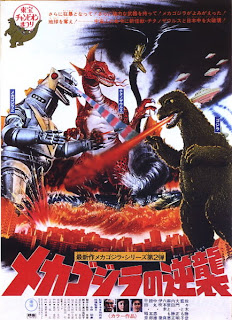 Aka "The Terror of Godzilla"


With “Godzilla vs. Mechagodzilla” being a hit it only made sense to bring the chrome dome clone of Big G back for a direct sequel. So the following year came “Terror of Mechagodzilla” (confusingly titled “The Terror of Godzilla” for U.S. theatrical release) but despite the impressive robotic enemy returning and with original “Godzilla” director Ishiro Honda at the helm, this fifteenth entry in the franchise really shows it’s tired blood and resulted in the end to the initial run of the franchise (commonly revered to the “Showa era”).

After the brig brawl that concluded the last film which resulted in Godzilla throwing Mechagodzilla into the ocean, a Japanese submarine searching for the remains comes across a new monster instead, Titanasaurus. Titanasaurus was originally discovered decades before by a scientist but his contemporaries shunned his so called ‘discovery’ and ran him out of the profession. Wanting revenge he helps the race of space apes rebuild Mechagodzilla to take over the world. Can Godzilla beat chrome dome once and for all without an ally? 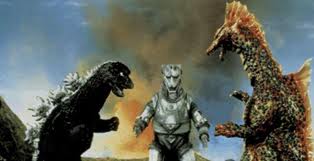 Mechagodzilla is still as cool as ever but the alien invasion plot device is really old hat now. The budget was obviously lower as the audience isn’t graced with the campy transformations of the space apes as seen in the last film and they hide the fact by having the aliens wear dorky helmets instead. I did dig the cyborg subplot with the scientists daughter being installed with the control device for mechagodzilla and an INTERPOL agent that has fallen in love with her has to decide whether to kill her or not.

The new monster Titanasaurus isn’t overly special either showcasing the Toho creative team was running short on creativity at the time. He’s just an average aquatic looking dinosaur that has a hilarious cackle. His really only special ability is to cause hurricane level winds by waving his fined tail, an ability already showcased previously with monsters such as “Rodan” and “Mothra”. I did love the introduction of Big G however with his dark, moody revealing after Titanasaurus destroys an oil refinery. It’s perhaps my favorite introduction to the big guy in the entire series.
I did love how Toho gave the reins to this sequel back to the Big G’s original creator Ishiro Honda as it gave him the opportunity to correct the mistake he made by helming the series worst entry “All Monsters Attack”. It almost seems serendipitous in the fact that this would also be the last entry of the original run of the series that he created and it’s fitting he would book end the series as well. It was due time to give the big fella a rest as though not a bad entry at all, “Terror of Mechagodzilla” just feels tired and wore out as if the creative teams were running out of ideas. This however wouldn’t be the last audiences would see of Godzilla as he would return a decade later, reborn and revamped for a new generation.

Godzilla will return in "Godzilla 1985"

Written By Eric Reifschneider
Posted by Cronosmantas at 9:44 AM