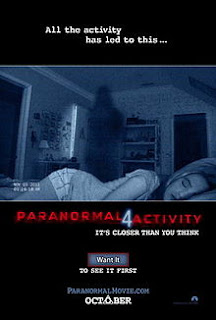 Talk about a roller coaster horror franchise, the "Paranormal  Activity" series kicked off with a rather fun (albeit unoriginal) first film and it's been up and down since. "2" was crap, but "3" sparked some smarter moments that made it a rather surprising entry. Now we are up to "Paranormal Activity 4" and it's so obvious that this franchise has run out of juice that this entry not only rehashes many of the same scare tactics, but in its attempts to add to the mythos of the story it completely becomes an illogical mess of poor writing and confusing plot progressions. Despite the year turn around on each entry, this one handedly feels the most rushed. "Paranormal Activity 4" makes the other films look like arthouse pieces.

Five years after the ending events of "Paranormal Activity 2", a family living in Nevada find themselves in the path of demon possessed family. The young teen daughter Alex (Newton) is the first one to suspect when a mysterious neighbor boy Robbie (Allen) has to live with them for a while when his mother is taken to the hospital. After Robbie's arrival, he quickly becomes friends with the young son Wyatt (Lovekamp) and mysterious things begin to happen around the house indicated by an invisible presence.

I admire the fact that this franchise has desperately tried to add onto the mythos of the series with each entry. Where vague hints towards a larger plot are hinted at in each movie, the subsequent entry answers some while opening new questions. This allows the whole series to be an intriguing watch despite mixed bags of quality. This is essentially where "Paranormal Activity 4" fails for me as both a film and as part of the series canon. Rarely does it answer anything specifically left open by the first three and when it does or tries to add to the demon possession mythos, it haphazardly throws a few things together and leaves a lot of very illogical and messy questions. The reappearance of Katie from parts "1" and "2" as the villain seems thrown in there and leaves us wondering more about how the hell she got there rather than wondering what she will do next and the events surrounding the reason she chose to terrorize this family (there is a out of left field twist that seems ridiculously forced) is laughable at best. I believe the intent of the film what to create even more mystery for further sequels (or prequels), but it leaves this entry hanging as a complete wreck of missed neural connections and poorly crafted vagueness.

This failure as an entry into the series is only heightened by the fact that, as a stand alone film, "Paranormal Activity 4" is a failure too. The scares are never scary and obviously rehashed. People flying around and doors opening by themselves are not, at this point, enough to cut it. What 'new' scares they do add, like a "where's the knife" game and a rather well built bathtub sequence, fail to pay off in the end. The bath tub scene in particular is such a failed scare that it only left me wondering if it was meant to be part of a bigger scare later on. It wasn't. Even the well treaded idea of 'don't believe the teenage daughter about crazy shit' that is a horror staple is not fully realized. "PA4" never develops that relationship between its characters where it would seem reasonable for anyone to not believe her - particularly when she has all kinds of video evidence that she seemingly forgets she has to show them.

In the end, "Paranormal Activity 4" reigns the worst of the series and one of the biggest experiments in failed franchising I've seen. I would have been more pleased had they made it really bad so I could have gotten some unintentional laughter out of it, but the film seems content with just being a confusing supernatural flick with little payoff to anything. Perhaps the fifth entry into the series will answer some of the questions left by its ill explained script or poorly executed scares, but at this point I refuse to get my hopes up. At this junction, I highly recommend just skipping this one.

Hell, I know some of you are collectors out there. I am too. So here's your chance to click the links below to order your copy of "Paranormal Activity 4" to finish your collection.