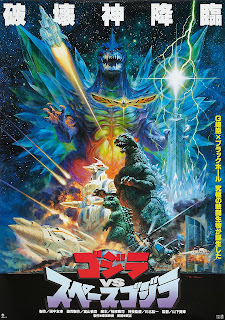 
I knew it would be too good to be true. Toho was just pumping out too many good films too fast for it to last forever and the one film a year tight schedule finally caught up to them. The lamely titled “Godzilla vs. SpaceGodzilla” just fell victim to a hurried production resulting in a tired story of total redundancies. Either that or watching all these damn Godzilla movies in a row is finally wearing down by brain function. 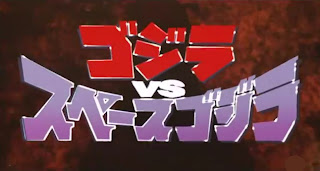 A Japanese team part of the ‘G-Force’, which includes that psychic chick that’s been a reoccurring character since “Godzilla vs. Biollante”, have a new plan. Since they can’t kill Godzilla they decided to try to control him so they shoot a transmitter at the base of his skull in hopes our psychic chick can influence him. Of course it doesn’t go as planned and problems are made worse when a new monster, “SpaceGodzilla”, emerges and its up to a new human controlled robot called Mogra to help Godzilla destroy this bastard clone of himself. 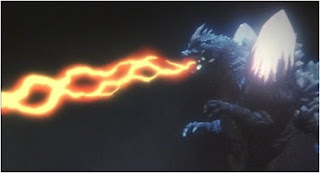 SpaceGodzilla, despite it’s dumb name, is actually a rather cool creation from Toho. It’s a mean looking Godzilla clone mixed with crystals and the result is rather magnifying. How he was created though is fucking ridiculous. The film offers two far out explainations; the first being Mothra carried Godzilla cells into space and they mutated in a black hole and the second is Biollante shot Godzilla cells into space with the same outcome. I’m all for accepting a lot of sci fi mumbo jumbo from the Godzilla series but this is just lazy. Also to top it off the events of “Godzilla vs. King Ghidorah” erased Godzilla from history up until that film so Biollante would have never existed! 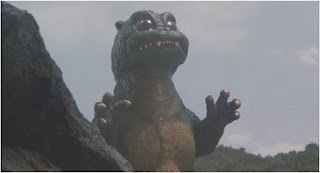 The new look of Godzilla’s son was also too damn childish for my taste; it just brought back awful memories of Minilla from the original era of the franchise. He’s not Philsbury Dough Boy bad but only a step above that. Is it really that fucking hard to make him look like his Papa? Also Mogra, the dorky giant robot from “The Mysterians”, is just a lame stand-in for the Mechagodzilla. Why not just rebuild Mechagodzilla for this sequel instead of introducing this silly carbon copy? 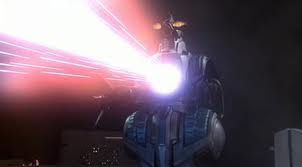 “Godzilla vs. SpaceGodzilla” lives up to its dumb name by easily being the worst of the “Heisei Era” of the “Godzilla” franchise. SG looks pretty cool with its crystals worked into the suit but the explanation of his arrival and his destructive efforts are lame and repetitive. The whole film just feels rushed with nothing new or creative introduced into the story. Hell the rushed production even affected Godzilla as there is even a scene where his tail breaks! All this mixed with the new childish look of Godzilla’s son just left a sour taste in my mouth. I do have to admit, much like the other entries into the “Heisei Era”, the poster artwork is pretty damn cool… much better than the actual film.

Godzilla will return in "Godzilla vs. Destorayah"

Written By Eric Reifschneider
Posted by Cronosmantas at 7:19 PM