Godzilla and Mothra: The Battle for Earth (1992) 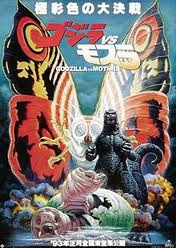 THE BATTLE FOR EARTH

Aka "Godzilla vs. Mothra"


Re-introducing King Ghidorah with the last sequel proved to Toho that audiences wanted to see Godzilla fight monsters they were already familiar with from the old series. Due to this it would only be natural for them to bring back Mothra and thus they began “remaking” older sequels, but “remake” is a poor word choice as the the film is completely different when it comes to plot. The title however makes it confusing as it was released in Japan as “Godzilla vs. Mothra” and to avoid audiences mistaking it for the 1964 sequel “Mothra vs. Godzilla”, it was retitled “Godzilla and Mothra: The Battle for Earth” for American video release. 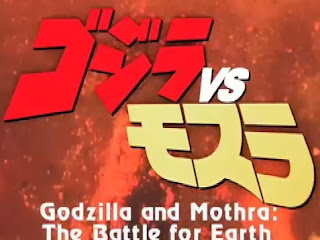 Picking up right after “Godzilla vs. King Ghidorah”, a meteor crashes right beside Godzilla and Ghidorah after they go crashing into the ocean (seriously, what are the chances?!). The meteor causes a tidal wave that reveals an ancient egg of Mothra off the shore of an island. The bad part is that the meteor also reawakens an ancient evil moth known as Battra. This armored caterpillar bastard starts making its way to Tokyo but soon Mothra is on his way to cut him off, but Godzilla makes it a little difficult (which results in a fun underwater battle between the three). 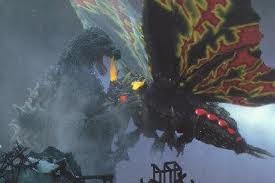 Though the plot is different from the 1964 sequel, people familiar with Mothra will fnd a lot of the same plot devices in this nineteenth entry in the franchise (fourth in the “Heisei Era"). We get Mothra’s two attractive twin fairies and her starting in her larva stage before cocooning herself to become the butterfly later. I do have to say I am really digging how Toho is making Godzilla more animal-like in nature with this second era of the franchise. He’s supposed to be an antagonist damnit, not some hero of the earth! What I also dig is that Toho has all three monsters fight each other before Battra finally turns on Godzilla resulting in a rather funny moment when both it and Mothra fly his ass out to sea. 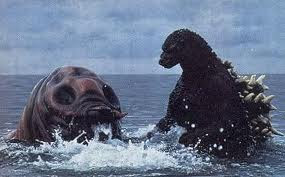 Overall it’s the “same ‘ol same ‘ol” with this sequel (especially if you watch a ton of Godzilla films in a row, like I am with my “Godzilla Tokyo Stompathon”) but it’s a solid entry into the franchise. I liked how Toho introduced a new monster in the form of Battra to up the ante instead of just having Big G and Big M going at it like in the original 1964 sequel. Unlike many monsters in the Godzilla franchise, Mothra was able to break free at the end and become the main focas of her own spin-off franchise later with the “Rebirth of Mothra” trilogy which is fitting considering Mothra had her own film before merging into the Godzilla franchise.

Godzilla will return in "Godzille vs. Mechagodzilla II"